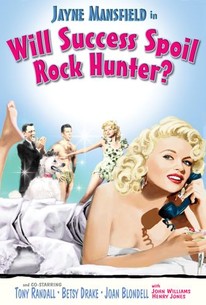 Jayne Mansfield recreated her starmaking stage role in this film adaptation of George Axelrod's Broadway comedy. Mansfield plays a Monroe-like movie queen whom adman Tony Randall hopes to sign for a product endorsement. Through a fluke, the press believes that Randall is having an affair with Mansfield; she eagerly pounces on the attendant publicity, much to the dismay of her body-builder beau (Mickey Hargitay, then married to Mansfield). At the behest of his ad agency, Randall is forced to propose to Mansfield on a coast-to-coast TV show, which breaks the heart of his true love (Betsy Drake). Both Randall and Mansfield are saved from a marriage neither one wants by the last-minute arrival of Mansfield's hometown boy friend (Groucho Marx). Director Frank Tashlin uses Will Success Spoil Rock Hunter as an excuse to take satirical potshots at everything from TV commercials to the unwieldiness of CinemaScope. ~ Hal Erickson, Rovi

Louis Mercier
as Frenchman
View All

The picture sends up and encapsulates the complacency of the conformist Eisenhower years.

Frank Tashlin never could harmonize his celebratory/critical impulses toward American pop culture, so it comes as no surprise that this is both his funniest and most despairing picture.

In converting the stageplay Will Success Spoil Rock Hunter? to his purposes, Frank Tashlin turns out a vastly amusing comedy.

[Tashlin], as the writer, producer and director of the film, has let it go mushy and sprawling even more than the original play of George Axelrod.

The not inconsiderable charms of Jayne Mansfield are much to the fore, but it's Randall's performance as timid advertising executive Rockwell Hunter that holds the whole thing together.

Ad agencies and television, instead of Hollywood, are noisily satirized in Hollywood's rewrite of George Axelrod's Broadway farce. It's a funny show just the same.

"...it's not the targets that failed to entertain me as much as the way the movie takes aim."

Cynical look at America during the 1950s.

True Mansfield vehicle, one of the few.

Frothy, fun comedy with some smart jabs at advertising and fan worship. Tony Randall is a hoot as the suddenly fish out of water main character and Jayne Mansfield, repeating her stage triumph, is a knockout and proves an adapt comedienne. Had she had more roles like this her career at the top might not have been so short. Joan Blondell scores strongly as Jayne's right hand woman.