William S. Burroughs: A Man Within2010 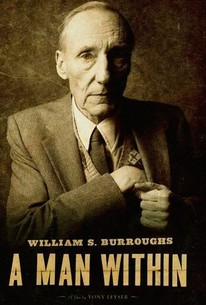 Featuring never-before-seen archival footage of Burroughs, as well as exclusive interviews with colleagues and confidants including John Waters, Patti Smith, Iggy Pop, Gus Van Sant, Genesis Breyer P-Orridge, Sonic Youth, Laurie Anderson, Amiri Baraka, Jello Biafra, and David Cronenberg, WILLIAM S. BURROUGHS: A MAN WITHIN is a probing, yet loving look at the man whose works at once savaged conservative ideals, spawned countercultural movements, and reconfigured 20th century culture. The film is narrated by Peter Weller, with a soundtrack by Patti Smith and Sonic Youth. Burroughs was one of the first writers to break the boundaries of queer and drug culture in the 1950's. His novel Naked Lunch is one of the most recognized and respected literary works of the 20th century and has influenced generations of artists. The intimate documentary breaks the surface of the troubled and brilliant world of one of the greatest authors of all time. -- (C) Oscilloscope

Critic Reviews for William S. Burroughs: A Man Within

Mostly, "A Man Within'' is a breezily stylized, very enjoyable trot through the writer's life, theme by theme, era by era.

The documentary persuasively argues that Burrough's most dangerous addiction might have been the refusal of love.

There is not a word or image wasted in a documentary you wish ran an extra half-hour beyond its condensed 90 minutes.

Leyser's collation of interviews and stock footage is polished enough to effectively perpetuate the Burroughs legend.

At a mere 88 minutes, it feels a bit glancing. But as an introduction or refresher course, it gets the job done.

After the film, I felt I had a more complete picture of a man whose legendary status as a writer and icon had made him seem almost untouchable.

Engrossing documentary tells us all the vital things we should know about William Burroughs.

This one is more geared toward people who aren't already fans, though fans will find much to enjoy.

Burroughs was a quasi-obsession of mine during my youth and young manhood, and he's the only Beat (including Keoroac) that I don't feel I have to some extent outgrown. He was also ... an extremely "strange ranger."

Yony Leyser is unduly proud of being kicked out of film school, especially because his first feature film displays so many of the amateur mistakes that might have been solved by a couple more years in the classroom

Fairly disorganized in the telling and rather impersonally told by filmmaker Yony Leyser, this documentary biography of the stone-faced Beat author of The Naked Lunch is still worth seeing.

Audience Reviews for William S. Burroughs: A Man Within

"I have never been gay a day in my life and I'm sure as hell not a part of any movement" Burroughs was a deconstructor of labels (of any type) and that's what especially calls my attention to him. "He opened up to me not gay culture, but gay rebels who couldn't fit in with gay culture, who were very different. (...) Burroughs has an uneasy relationship with queer culture in America, or queer writing or whatever. Burroughs was never seen as part of that, he was still too transgressive. Even when it become sort of okay to be queer, he was beyond queer".

A Man Within is a very good film, one I think you should see, but it is stilted by a pet peevey error in pacing and a chronological mistake by bringing up Joan's death far too late. We are almost an hour into the film-and have already looked at Naked Lunch, the Beats, the dope, the rock stars, the countercultural divinity and so on-before we are at last offered an account of the events that produced all of the above. Director John Waters is on hand here, a welcome presence in so many recent documentaries, and he seems to be the only one acting as a cultural critic rather than as a friend or fan. Waters raves about how Burroughs became a gay man, a junkie, and even a punk without breaking a sweat, long before such things were even remotely acceptable or "cool". Burroughs didn't deal in remorse, certainly not for the shooting of his young wife Joan Vollmer as her death to him was far beyond that, something so terrible, "You can't fix it" and consequently he carried the guilt around with him for the rest of his days with the ghost of Vollmer everywhere.

Documentary on the famous literary outlaw, the cadaverous junkie novelist who beat the censors, and accidentally killed his wife playing "William Tell." Topics include early life, the Beat Generation, homosexuality, drug use, loneliness, and even a little bit of literature; adulatory interviewees include John Waters, Iggy Pop, Gus Van Sant, and Patti Smith. Very well put together, if not exactly penetrating, with some appropriate avant-garde visual bits stuck between the talking heads

The documentary "William S. Burroughs: A Man Within" proves that Peter Weller has starred in other movies except for "Robocop," namely "Naked Lunch" which is based on the works and life of William S. Burroughs.(Weller also narrates this documentary.) And what has this insight have to do with anything except showing off my movie knowledge? Well, it shows that just as actors perform many roles in their careers, on a less literal note, other artists have more than one role in life and that is especially true for Burroughs, who is mostly known for the provocative fiction he wrote. But as this fine documentary shows, he was much more complicated than that with diverse interests, proving him to be a true individual, full of contradictions, fighting against the conformity of modern life. First, a lot of his writing, especially "Naked Lunch" and "Junkie" was about his experience with drugs. So much so, that a friend of mine and I agreed that you might just have to be on heroin to understand a lot of it.(Not a good reason to do drugs by the way.) Instead, listen to his spoken word recordings, which are incredible with his distinct drawl being captured so well. On a personal level, along with drugs, there were the guns and snakes which all could be thought of having death in common.(However, if I learned anything in Albuquerque, it is that sometimes snakes are our friends.) As the film details his relationships with other men, it is a little shakier on the subject of women, having shot his wife in a drunken incident which supposedly haunted him and spurned his literary career. I remember reading in a biography that any misogyny stemmed from his hatred of traditional feminity while Patti Smith, an androgynous rocker, testifies to their friendship. In the end, Burroughs was apparently quite the influence on not only literature but music, as many photos and interviews testify to, although somebody's going to have to explain the Leonardo DiCaprio photo one of these years.