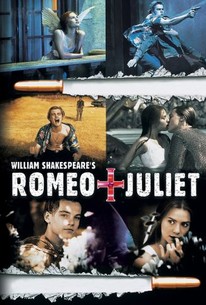 Critics Consensus: Baz Luhrmann's visual aesthetic is as divisive as it is fresh and inventive.

Critics Consensus: Baz Luhrmann's visual aesthetic is as divisive as it is fresh and inventive.

Critic Consensus: Baz Luhrmann's visual aesthetic is as divisive as it is fresh and inventive.

The classic Shakespearean romantic tragedy is updated by director Baz Luhrmann to a post-modern Verona Beach where swords are merely a brand of gun and bored youths are easily spurred toward violence. Longtime rivals in religion and business, the Montagues and the Capulets share a page from the Jets and Sharks of West Side Story when they form rival gangs. Romeo (Leonardo DiCaprio) is aloof toward the goings-on of his Montague cousins, but after he realizes that Juliet (Claire Danes) is a Capulet at the end of one very wild party, the enmity between the two clans becomes the root of his angst. He relies heavily -- and with serious consequences -- on his rebel gender-bender of a friend, Mercutio (Harold Perrineau Jr.), and Father (not Friar) Lawrence (Pete Postlethwaite) for protection and support. Romeo is, of course, exiled, and it looks like Juliet will be forced into an arranged marriage with the bland Paris (Paul Rudd). It ends, as Romeo and Juliet must, when Romeo hears a tragic piece of misinformation and brings his suicide wish to what was meant to be Juliet 's temporary tomb. This time, though, the turf and the weapon of choice have taken a turn toward the surreal. ~ Tracie Cooper, Rovi

Miriam Margolyes
as The Nurse

Look back on your first love, without it making you wince.

A slick blast of ''decadence,'' the kind of violent swank-trash music video that may make you feel like reaching for the remote control.

Luhrmann's gleefully cinematic version of the play is so relentlessly inventive and innovative, it takes 20 minutes to get a grasp on how appropriate is his approach to the material.

Where is the audience willing to watch a classic play thrown in the path of a subway train?

Puts Shakespeare's greatest romance in a choke-hold and takes it slam-dancing.

Luhrmann's style simply defibrillates Shakespeare's text. ... For me, it's the overblown carnality that makes it such a perfect adaptation of the source material, and that still leaps from the screen today.

This glitter bomb of a film explodes the play and builds it back up again... result[ing] in a truly unforgettable cinematic experience.

Leonardo DiCaprio and Claire Danes are both callow and beautiful and wonderful.

Huge credit to Danes, especially later in the film, when Juliet actively rebels. Her "marvellous much" and "I long to die" speeches are forceful and imbued with deep feeling.

Romeo + Juliet is a stunningly detailed, perfectly cast, fun-fuelled immersive experience. A true love letter to one of the best movies of the nineties, this event is an absolute must for fans. Get ready for the party of the summer.

Excellent modern adaptation of Romeo & Juliet. I love the vibrant colours, costumes and soundtrack. I'm also very impressed with the use of ole English. Leo and Claire make a good on screen couple. As usual Leo's character dies. It seems to be a recurring event, but then R&J is a tragedy. Leo is the greatest tragic hero.

A fresh, very enjoyable and engrosing adaptation of Shakespeare's classic play. DiCaprio and Danes are excellent.

Romeo: Did my heart love 'til now? Forswear its sight. For I never saw true beauty 'til this night.  "The Classic Love Story Set In Our Time"  I found little enjoyment in this modern Romeo and Juliet. Its style was really annoying and left my head aching. This movie boarders on unwatchable. Claire Danes and Leonardo DiCaprio are okay, but they don't give amazing performances. Nothing about it worked. The film was way too busy and could have possibly worked if Luhrmann had went for a more subtle approach.  I probably went into this with too high of expectations, which were completely crushed by the first 10 minutes of the movie. In a different directors hands, this could have possibly worked. In Luhrmann's, it is a complete mess and a waste of time.

I don't usually like Baz Luhrmann's aesthetic (too noisy), but it just works here, alongside this improbable classic story with the cuh-razy Shakespearean dialogue. This is my favorite, favorite adaptation of the story: fairy lights, fireworks glittering in the night sky, multicolored California bleached to its rawest and most potent, Mercutio the fabulous drag queen, and Leo's beautiful beautiful face peering into the translucent aquarium (no wonder Claire Danes practically orgasms in the pool).