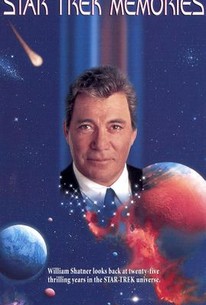 William Shatner spent many years as Captain James T. Kirk, the captain of Star Trek's Enterprise and its intrepid crew. This video features Shatner and various other original cast members as they recollect some of the series' most interesting moments. Among the topics covered are the origins of the Vulcan hand-salute, why the ship's chief engineer was Scottish, and how fans rallied to save the show after its cancellation. Some of the featured actors include Leonard Nimoy, DeForest Kelley, James Doohan, George Takei, Nichelle Nichols, and Walter Koenig.

There are no critic reviews yet for William Shatner's Star Trek Memories. Keep checking Rotten Tomatoes for updates!

There are no featured audience reviews yet. Click the link below to see what others say about William Shatner's Star Trek Memories!