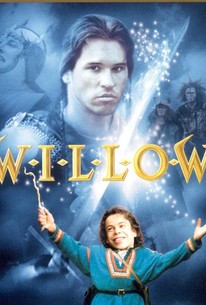 Critics Consensus: State-of-the-art special effects and an appealing performance from Warwick Davis can't quite save Willow from its slow pace and generic story.

Critics Consensus: State-of-the-art special effects and an appealing performance from Warwick Davis can't quite save Willow from its slow pace and generic story.

Critic Consensus: State-of-the-art special effects and an appealing performance from Warwick Davis can't quite save Willow from its slow pace and generic story.

Though Willow was one of director Ron Howard's few box-office disappointments, it definitely deserves a second look. At once an epic celebration and a gentle spoof of the sword-and-sorcery genre, the film concerns the efforts by little person Willow Ufgood (Warwick Davis) to protect a sacred infant from the machinations of a wicked queen (Jean Marsh). One source book has assessed the picture as a combination of The Ten Commandments and Snow White. This is true enough, except that neither one of those properties offered such offbeat casting choices as Billy Barty and Jean Marsh. Executive producer George Lucas has (through the conduit of screenwriter Bob Dolman) added elements of his own Star Wars saga to the stew. The results are generally satisfactory, though the film is sometimes weighed down by too much plot, and the action sequences may not be suitable for very young children. Incidentally, this is the film where co-star Val Kilmer met his future wife Joanne Whalley. ~ Hal Erickson, Rovi

Five Favorite Films with Warwick Davis
Mangold Climbs Aboard the "3:10 to Yuma"

If it evaporates from memory with the airiness of a bubble bath, at least it leaves a friendly glow and a sense of a magical world lovingly evoked.

There isn't a single major character in the film who is engaging.

Willow exchanges the high-tech gleam of the Star Wars universe for the low-tech look of a Tolkienesque world, but otherwise it's business as usual.

At the heart of this overproduced jumble you can still hear the faint beat of the simple story Lucas conceived about 15 years ago while researching Star Wars.

Willow is not without its charms -- the effects are more than special, the set-pieces suitably epic -- but it just doesn't fulfill the promise of certain other fantasy films.

It takes forever for the story to get started, and once it does it holds few surprises.

The underappreciated fantasy film from George Lucas and Ron Howard delighted the young audiences it was intended for, poked fun at its critics -- by name -- and is now set for a Disney+ reboot.

Willow mostly calls to mind dozens of other, better movies, ranging from Lucas's own Star wars to the Ten Commandments and Snow White and the Seven Dwarfs. It's a malformed Tolkien-type fantasy.

The character designs are fascinating, as are the creature effects (helmed by Industrial Light & Magic and nominated for an Academy Award).

Willow borrows shamelessly from sources as varied as the Bible, A Midsummer Night's Dream, The Wizard of Oz and even from Star Wars itself, plastering it all together in a witless, muddled pastiche.

The plot grinds on inescapably to its predictable climax, with the viewer fully aware of what awaits long before the events unfold.

Classic tale of good vs evil with great characters and creatures throughout. All the cast are likeable and fit perfectly into the story making the film quite humorous in places, the 'Brownies' and 'Madmardigan' especially hehe. The action is nice and not too brutal, brings back the feeling of old 'Errol Flynn' films in a way with swords, swashbuckling and the dashing hero. The main event in this film was the effects in the form of the cgi, first time used in a movie, looks cheesy now but it was state of the art back then. Tippet creatures are nice too with the old stop motion effects, they do look atad raggy these days and are obvious but it kinda harks back to good old fashioned Ray Harreyhausen fantasies. Probably the first big film for Val Kilmer this, he is good as the sort of anti hero turned complete hero, some nice dialog and visual gags, abit silly but hey. Also the first big lead role for UK born Star Wars star Warwick Davis who really does create quite a cult memorable character that is very likeable. Classic fantasy fluff and winner.

Adventure doesn't come any bigger than this. Well the idea of seeing it as an adult when I really wanted to see as a kid really failed! It was mostly boring at times although the end was the best thing of this movie. The story wasn't that interesting to me sadly. This movie actually was nominated for 2 Oscars even though it didn't won any so give it a shot if you like, maybe your experience will be different. In the dungeons of the castle of the evil Queen-sorceress Bavmorda, a prisoner gives birth to a child who, according to an ancient prophecy, will put an end to the reign of the Queen. A midwife saves the child from the wrath of Bavmorda, but is forced to throw her cradle in a river when reached by the Hounds of the Queen. The river brings the child near a village of nelwyns, and little Willow finds and adopts her. When the Hounds reach the village, Willow begins a difficult journey to bring the baby back to her people and to fulfill the prophecy.

As good George Lucas fan this is another example of his remarkable storyteller's skills. It's a story of a nelwyn called Willow that found a baby near a river. And that's when the problems start. With the help of Madmartigan (a thief) and 2 pixies they need to return this baby safetly to a nearby kingdom befor the evil queen Bavmorda foun him first. Just great! 5 stars.