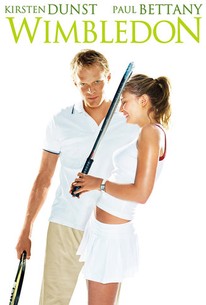 Critics Consensus: A predictable, bland rom-com, but Bettany proves to be an appealing lead.

Critics Consensus: A predictable, bland rom-com, but Bettany proves to be an appealing lead.

Critic Consensus: A predictable, bland rom-com, but Bettany proves to be an appealing lead.

Peter Colt is an unlucky guy, scoring "love" both professionally and personally. Seeded near the bottom of the world tennis ranks, he manages to score a wild card, allowing him to play in the prestigious Wimbledon tournament. There, he meets and falls in love with American tennis star Lizzie Bradbury. Fueled by a mixture of his newfound luck, love and on-court prowess, Peter works his way up the ranks of the tournament players and actually stands a chance of fulfilling his lifelong dream of winning the men's singles title--if his luck can just hold out.

John Barrett
as Himself

John McEnroe
as Himself

Chris Evert
as Herself

Ryan McCluskey
as Outside Broadcast Director

Thomas Blore
as Peter and Lizzie's Son
View All

Works better as a sports movie than a love match.

All in all, it's rather pleasant, but nothing else.

The movie needs the stars' charm and director Richard Loncraine's polish, because the faulty script is just barely good enough to hold us for 100 minutes.

Lobs nothing but clichés.

A pleasant enough entertainment at a time when movies either pleasant or entertaining are in short supply.

Bettany is charming, and thankfully he and Dunst are appealing together.

I cared about the resolution of the film, and the closure for these characters.

An enjoyable little crowd-pleaser with likable leads and a few good laughs.

The story plays out predictably with a happy ending -- think The Natural on Wimbledon's Centre Court -- and all in all, it's a decent romantic comedy.

You aren't likely to see a film with more warmth and good humor anytime soon, or one that does more to give feel good filmmaking a good name.

Do we really need to see another film where a gorgeous, talented and desired American woman is whisked away by a stammering insecure British man with an inner monologue?

Bettany and Dunst make a cute couple that is as fiercely competitive in their love lives as they are on the court.

In fairness i never though a tennis related film would be so good.

I strangly enjoyed this movie, i enjoyed it more because Sam Neill was in it but it is a good and amusing movie. Its a sweet enough Romcom with quite a few laughs.

A really great film! One of my all time favourite films! A must see!