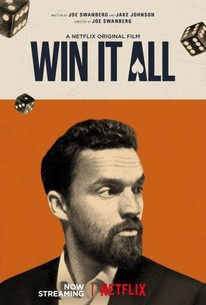 Win It All Videos

Win It All Photos

Jake Johnson (New Girl) stars as small time gambler Eddie Garrett, who agrees to watch a duffel bag for an acquaintance who is heading to prison. When he discovers cash in the bag, he's unable to resist the temptation and winds up deeply in debt. When the prison release is shortened, Eddie suddenly has a small window of time to win all the money back. Directed by Joe Swanberg (Drinking Buddies) and co-written by Swanberg and Jake Johnson, the Netflix original film Win it All co-stars Keegan-Michael Key, Joe Lo Truglio and leading Mexican actress Aislinn Derbez. Jake Johnson and Joe Swanberg also serve as producers, along with Alex Orr.

News & Interviews for Win It All

Kubo and the Two Strings, Kevin Hart: What Now?, The BFG, and More on Netflix and Amazon Prime This Week

View All Win It All News

Critic Reviews for Win It All

Win It All is a chance to see a handful of great comic actors, Johnson chief among them, milk Swanberg's low-key narrative designs for all the comedy they're worth.

Win It All is just the latest stellar collaboration between Swanberg and Johnson.

For the high stakes involved, Win It All feels strictly low stakes.

There's enough disreputable behavior bookending the righteousness, and enough solid jokes along the way, to make the effort moderately entertaining.

"Win It All" is a small character drama that, through improvisation, renders relationships impeccably; it's at once specific and universal. But "Win It All" is also a new look for Swanberg. It's the first film he has made that has a script.

Swanberg has delivered his most traditional movie to date -- and for this prolific filmmaker, who spent ages defying conventions, that's nothing short of a radical step forward.

One film that defeats the mumblecore flaw of open-ended aimlessness.

You go in with the highest of intentions, all the necessary wherewithal to play a great hand, and in one fell swoop lose it all. That's not an explanation of the gambling vice; that's Win It All.

The balance between those two impulses - great human tragedy boiled into an almost Shakespearean comedy - is played with throughout and the result is nothing shy of delightful.

Jake Johnson carries Win It All with ease until the final act when the film ultimately loses its way.

Jake Johnson brings a type of charisma and serious humor that's no different than his past roles in New Girl and Drinking Buddies. His way of acting really helps to tell a very real story of a man on a downward spiral.

Audience Reviews for Win It All

Simple stories can offer the most sincere acting. On paper, Win It All appears a generic gambling-gone-wrong film. And while the story doesn't deviate too much from this perceived notion, the cast and characters elevate the film exponentially. Particularly, the relationship between brothers Eddie (Johnson) and Ron (Truglio) is incredibly moving and realistic. Lastly, though the film sports comedic actors like Keegan-Michael Key and Joe Lo Truglio, Win It All rarely feels like a comedy. I never found myself laughing, or on the verge of doing so. There are serious implications to the characters' actions; few of those implications positive. But generally, Win It All does manage to put you in a feel-good mood - it'll just take uneasy moments to get there.

Win It All Quotes