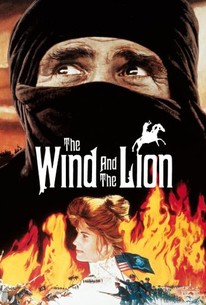 The Wind and the Lion Photos

In the early 1900s, an American businessman was kidnapped by a rebellious Arab chieftain, principally as a means to embarrass the sultan of Morocco. This abduction sparked the threat of armed intervention by President Theodore Roosevelt, which was never carried out. In The Wind and the Lion, the unattractive male captive is replaced by the gorgeous female Mrs. Pedecaris, an American widow played by Candice Bergen. The ruthless but essentially decent Arab chief Raisuli is portrayed by Sean Connery, while Teddy Roosevelt is depicted as a jingoistic blowhard by Brian Keith. The film's main theme -- that of America's emergence as a world power -- is largely secondary to the growing mutual-respect relationship between Mrs. Pedecaris and Raisuli. After releasing his hostage, Raisuli is himself captured by German forces, who at the behest of the Kaiser are seeking out methods of laying the groundwork for what would evolve into World War I. Mrs. Pedecaris must then help Raisuli escape.

Vladek Sheybal
as The Bashaw of Tangier

Nadim Sawalha
as Sherif of Wazan

Marc Zuber
as The Sultan

Paul Rusking
as Reporter #3
View All

News & Interviews for The Wind and the Lion

View All The Wind and the Lion News

Critic Reviews for The Wind and the Lion

The Wind And The Lion is a neat mixture of romanticization and realpolitik [...] The film is memorable for its action scenes [...] but also for the reflective moments from which those action scenes are born.

The script is an embarrassment the directing is stilted; the editor must have felt he was watching a Ping Pong match.

Milius is in love with everybody, there are no villains, and so there is no excitement.

The result is indecisive and erratic. [Full Review in Spanish]

Milius's incredible balancing act might have turned very rancid, yet miraculously his mixture of full-blown romanticism and a genial sense of its absurdity produces a deeply satisfying picture.

An 'incoherent text' headier than any screen Kipling adaptation

A bogus history lesson that's a mixture of fact and fiction.

A kind of big-budget, all-star extravaganza the equivalent of which we really don't have today -- and for which mainstream movies are a little worse off.

The marriage of epic romance and the epic romanticization of brutality.

Audience Reviews for The Wind and the Lion

Movie making in the old style, with broad brush strokes substituting for detail (and Sean Connery as an Arab chieftain), here is the tale wherein hostages grow to care for their kidnappers. Connery is dashing as the bandit and Candice Bergen is sufficiently outraged at first, until she begins to admire the head chopping sheik who burbles those classic words of love, "You're a great deal of trouble, Mrs. Pedecaris," in a Scottish brogue. Okay, so there's some points of quibbling here, yet and still the overall effort is an winning one, successfully engaging the viewers into something akin to majesty. I like this politically incorrect bit of dash.

The action is great, the dialog crackles, and how can you not live a young Candice Bergen. Also watching Sean Connery playing Mulay Achmed Mohammed el-Raisuli the Magnificent with a Scottish accent is hilarious. But, I'm not sure how I'm supposed to feel about all the characters. I mean this is a movie where we almost start WW1 over a girl and her two kids. It's a movie where I'm supposed to sympathize with a guy who beheads two guys almost directly after we meet him. Still great fun. And I believe this is the first instance of blood splattering on the camera lens, to the best of my knowledge.

Based on actual events, The Wind And The Lion is the story of a banished Moroccan chieftan who kidnaps an American woman and her two children in an attempt to rid his country of its occupying European forces resulting in a stand off between he and president Roosevelt. Written and directed by John Milius who was responsible for scripts as diverse as Apocalypse Now and Conan The Barbarian, this film contains his typically clever dialogue and political subtext as well as a healthy dose of rousing action. There is a satirical commentary on colonialism in general as well as America's role as self-appointed world policeman; Roosevelt is shown as a man more interested in self-aggrandisement and bluster than justice, all too ready to send in the troops to stamp his will on the rest of the world (the American's glorious "victory" is against a hugely inferior and unprepared force. Plus ca change...) His opponent is played by Sean Connery at his most charismatic, and Candice Bergen ably fills a role originally intended for Katherine Hepburn as the kidnapped woman who grows to understand the man and realises he is no savage, but an honourable and educated leader of men. Add a great supporting cast and a rousing score, it's in turns funny, clever and exciting making this adventure from the old school at it's most stirring.

The Wind and the Lion Quotes