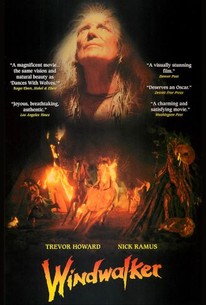 Trevor Howard stars as the titular Native American chief in Windwalker. Told in flashback, the film relates the early life of the Cheyenne chief, with particular emphasis on the deaths of his wife and son at the hands of the Crow tribe. In the interests of authenticity, the actors converse in the Crow and Cheyenne languages, compelling the producers to fit the film out with English-language subtitles. James Remar plays the young Windwalker, while James Remus dubs in Trevor Howard's voice as narrator. Windwalker was based on the novel by Blaine M. Yorgason.

James Remar
as Windwalker As a Young Man

Jason Stevens
as Horse that Follows

Bart the Bear
as the bear

Awesome in inspiring a spiritual awe.

Now, here's a movie from childhood, and one that I can never get tired of watching. An intriguing Native American film. This is a story about one man's life journey in finding true love, having a family, and striving to live after that family is destroyed. Great cast- James Remar, Nick Ramus, and Trevor Howard. Worth seeing!

Heh heh... nothing but non-native actors portraying the native americans in this film. Blue eyed grandfather Trevor Howard famous from Superman portrays Windwalker, the spiritual grandfather back to finish his mission. The only thing I enjoyed was the music which was beautiful and added a touch to this somewhat good movie. A nice story, but not all 100% native american.