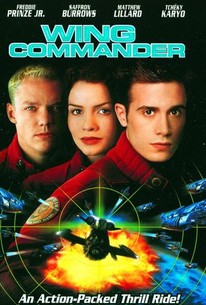 Based on a popular series of video games, Wing Commander introduces us to an elite fighter squadron in the year 2654. The Earth confederation is at war with a vicious race called the Kilrathi. The Kilrathi have captured a navigational device which will allow them to jump through worm-holes in space to arrive behind enemy lines. Only this highly trained squadron, led by three young pilots, stand in their way. Christopher "Maverick" Blair (Freddie Prinze Jr.) is just out of the Academy, but his lack of experience is more than compensated by his exceptional navigational skills, though he is still haunted by the deaths of his parents in a previous galactic war. His friend, Todd "Maniac" Mashall (Matthew Lillard), is a brash, gung-ho fighter jock always rushing into danger. Their wing commander and leader is Jeanette "Angel" Deveraux (Saffron Burrows). Assigned these two new pilots by Admiral Geoffery Tolwyn (David Warner), the strong and beautiful Deveraux is at first resentful, but later develops feelings for Blair. Perhaps the two will find time for romance on their way to saving the solar system. ~ Ron Wells, Rovi

Ralph Taylor
as Rodriguez
View All

10 Awesome Video Games That Were Made Into Terrible Movies

Playing up the military angle is the best move, but this and some excellent incidental effects can't completely disguise the shortcomings.

Though the ingredients are potent, their blending here mostly comes off as formulaic, humdrum and sometimes unintentionally laughable.

Wing Commander looks like it was put together by people who couldn't agree on whether or not the year 2564 would be colored with red bulbs and fluorescent cafeteria lights or costumed as if Urban Oufitters had gone to Uranus.

As the movie transforms into a video game -- with a faux John Williams score to boot -- the human element turns corny, then laughable.

Wing Commander is based on a video game and has roughly the same degree of character development. That is all most moviegoers will need to know.

It would have worked better as a single episode of a sci-fi television show rather than a standalone theatrical picture.

One of the most kitschy adaptation of a video game to film, and one of the biggest box office failures ever. [Full review in Spanish]

One of the lousiest and tedious science fiction entries of the late nineties...

At the risk of sounding repetitive, I feel angry that I have wasted a perfectly good Friday night watching something this completely worthless.

This movie based on a video game SUCKS!!! This movie is ridiculous and the storyline might just as well be from a 1950's B movie. The dialogue is awful, the acting worse, and the supposedly futuristic spacecraft looked like they were bought from a studio auctioning off props from old World War II movies. The characters are extremely well crafted in the game series, well, for a video game series anyway. Here, they come off as a bunch of tired clichés. Also, I take issue with the fact that Blair, the main character, is some kind of chosen one with special powers.

Feeble sci fi based on a computer game, which was actually more convincing, and had bigger stars (Malcolm McDowell and Mark Hamill, vs. Jurgen Prochnow and that bloke who was in...erm , that thing, you know....) Tries to be Top Gun in space, but manages to be even more cliched and simplistic. And the aliens are bollocks.