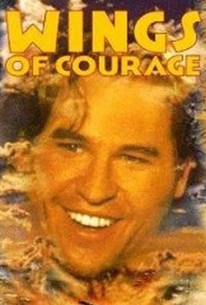 This was billed as the first dramatic feature to be shot in IMAX 3D. It was first shown at Sony's new IMAX 3D Theater in New York on an eight-story high screen. The story is based on the true-life tale of two French aviators, Jean Mermoz and Antoine de St Exupery, who in 1930 formed the first company to fly mail between South America and France. In those days it was a dangerous journey and the pilots needed a special kind of courage to make the trip. One of their new pilots, Henri Guillaumet flies the dangerous route between Santiago and Buenos Aires. During one trip, he crashes in the Andes during a fearsome storm. Later Exupery flies a rescue plane overhead, but is unable to see Henri, who decides to walk out on his own. Meanwhile, Henri's patient wife Noel and her beloved little dog anxiously hope that he will survive.

Victor Formosa
as Compradito
View All

Critic Reviews for Wings of Courage

The only reason to see the movie is to experience the process, and that's reason enough.

This 40-minute epic about mountain survival in the wake of a plane crash is like sitting through Alive again, though in this case there isn't anything for the hero to eat.

There are no featured reviews for Wings of Courage at this time.