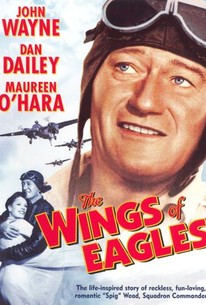 The Wings of Eagles Photos

The Wings of Eagles is filmmaker John Ford's paean to his frequent collaborator--and, it is rumored, drinking buddy--Cmdr. Frank "Spig" Wead. John Wayne stars as Wead, a reckless WW1 Naval aviator who (it says here) was instrumental in advancing the cause of American "air power". In private life, Wead becomes estranged from his wife Minnie (Maureen O'Hara) after the death of their baby. Drinking heavily, Wead tumbles down the stairs of his home, and as a result he is apparently paralyzed for life. With the help of happy-go-lucky Navy mechanic Carson (Dan Dailey), Wead is able to regain minimal use of his legs, but it seems clear that his Naval career is over. Fortunately, he manages to find work as a prolific Hollywood screenwriter, and after the attack of Pearl Harbor he is called back to active duty to oversee the construction of "jeep carriers". Not one of John Ford's more coherent films--in fact, it's downright sloppy at times--The Wings of Eagles nonetheless contains several highlights, not least of which are the "I'm gonna move that toe" scene with John Wayne and Dan Dailey, and Ward Bond's inside-joke performance as irreverent film director "John Dodge".

Fred Graham
as Officer in brawl

May McAvoy
as Nurse

Cliff Lyons
as Officer in Hangar

Critic Reviews for The Wings of Eagles

Coming from a director as esteemed as John Ford, this is a disappointing entry-a loud, long and shamelessly corny biography of a naval airman...

A bizarre, but touching, comical biopic.

Wants to be epic in scope but ends up feeling like ham-fisted CliffsNotes version of a man's life. The film loiters way, way too long on Frank Wead's early days as a hell-raising test pilot, then skips ahead through long sections of his life.

Though sentimental as a biopic of Navy hero Frank (Sig) Wead, John Ford's film has old-fashioned charm, a result of John Wayne's lead performance and his chemistry with Maureen O'Hara.

This routine sentimental biopic is directed with much feeling by John Ford.

Audience Reviews for The Wings of Eagles

John Ford's follow-up to The Searchers is surprisingly un-remarkable. A biopic of Frank "Spig" Wead, a solider turned cripple turned screenwriter, "The Wings of Eagles is an impeccably crafted piece of fluffy propaganda.

An excellent and often-moving biopic about navy-flier-turned-screenwriter Frank "Spig" Wead, this film features fine dramatic performances from John Wayne and Maureen O'Hara. Features the usual John Ford elements of sentimentality and brawling slapstick, but there's also an underlying poignancy that makes this a treat.

A movie that's powerful enough to make a grown man cry. John Ford tells the story of Frank Spig like no one else could have. With a combination of great action sequences and intimate character moments, this becomes more than just an average movie. John Wayne delivers a powerhouse performance, like always, and makes you truly admire Spig. It's such an uplifting and human story which shouldn't be missed by anyone.

The Wings of Eagles Quotes