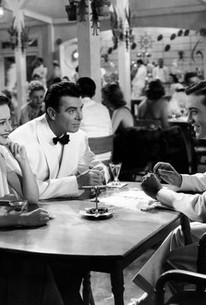 Wings of the Navy Photos

Filmed on-location at the Naval Air Training Stations in San Diego, CA, and Pensacola, FL, this black-and-white Warner Bros. drama was dedicated to the U.S. Naval Aviation Service and probably served as propaganda when it was released in 1939, right before the U.S. involvement in WWII. Submarine officer Jerry Harrington (John Payne) goes to Pensacola to train as a flying cadet, just like his father and his brother, longtime airman Cass Harrington (George Brent). Jerry ends up falling for his brother's girlfriend, Irene Dale (Olivia deHavilland), which only increases the competition between the two brothers. After Cass gets injured, Jerry becomes a pilot in San Diego and Irene must choose which man she wants. Also starring Frank McHugh.

Don Douglas
as Officer of the Day

William B. Davidson
as Brown

Critic Reviews for Wings of the Navy

A fine tribute to the United States Naval Flying service and to its system of training young men for the service. But as entertainment, its appeal will be directed mainly to those who are interested in aviation.

There are no featured reviews for Wings of the Navy at this time.

Wings of the Navy Quotes