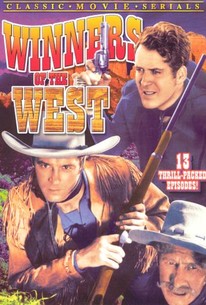 The assistant to a railroad president battles an evil empire builder in this 13 chapter adventure serial produced by Henry MacRae for Universal. The Hartford Transcontinental Railroad is advancing the line through Hell's Gate Pass when the project is stalled by an attack of marauding Indians. The raid is organized by King Carter (Harry Woods), who considers the land to be his, and a renegade half-breed known as Snakeye (Charles Stevens). During the skirmish, the railroad president's daughter, Claire Hartford (Anne Nagel), is kidnapped, and it is up to Jeff Ramsay (Dick Foran), Hartford's assistant, and his friend Tex Houston (Tom Fadden) to recover the girl. The war over the railroad line continues for 12 additional chapters until Ramsay and Carter meet face to face at the battle of Black Hawk. The Carter gang is wiped out by Ramsay and his new friend, Jim Jackson (James Craig) and a peace treaty is signed with Chief War Eagle (Chief Yowlachie). A star of Warner Bros. music Westerns in the mid '30s, Dick Foran, whose uncanny resemblance to Howdy-Doody was apparently never a handicap, is perhaps best remembered for playing Bette Davis' young suitor in The Petrified Forest (1936) and for starring opposite Abbott & Costello in Ride 'Em Cowboy (1942).

Critic Reviews for Winners of the West

There are no critic reviews yet for Winners of the West. Keep checking Rotten Tomatoes for updates!

There are no featured reviews for Winners of the West at this time.

Winners of the West Quotes