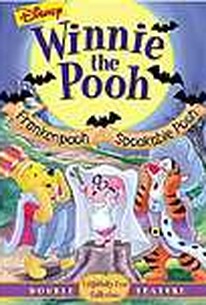 Frankenpooh
A spooky theme runs through several stories in this collection. "The Monster Frankenpooh" finds Dr. Von Tigger turning Pooh into a somewhat familiar-looking, scary creature. "Things That Go Piglet in the Night" features the characters on a ghost chase, and "Pooh Moon" finds Pooh and Piglet searching for honey while everyone else assumes they're missing--not just missing, but taken by the Grabme Gotcha. Charming visuals, terrific characters, touching stories. A winner.
Spookable Pooh
It's a rainy day, and Pooh and his friends are spending it in Christopher Robin's attic. Two stories from the delightful animated series follow: "A Knight to Remember," which finds the timid Piglet transported to a magical kingdom, where he fights a dreadful dragon, and "Rock-a-Bye Pooh Bear," in which Piglet has a nightmare and is afraid to go back to sleep. That leaves it up to Pooh, Rabbit, and Tigger to show how bad dreams don't have to come true. As always in the Pooh series, the animation is better than average for TV/video (and even charmingly quaint), and the characters are great fun to be with. --Tom Keogh

Critic Reviews for Winnie the Pooh - Frankenpooh and Spookable Pooh

There are no critic reviews yet for Winnie the Pooh - Frankenpooh and Spookable Pooh. Keep checking Rotten Tomatoes for updates!

There are no featured reviews for Winnie the Pooh - Frankenpooh and Spookable Pooh at this time.