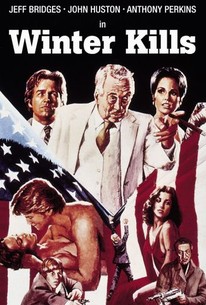 In this film, Jeff Bridges stars as the scion of a powerful Kennedyesque family, who has done his best to make himself obscure after the assassination of his brother, the former President of the U.S. Bridges is introduced to a terminally ill gentleman who claims to have been "the second assassin."

Patrice Bough
as Secretary One

Sidney Lanier
as Raymond the Butler

Agneta Eckemyr
as Nurse One

Regis Mull
as Cop with Keifetz
View All

Richert gives the film a hard, bright surface -- this is not a seductive fantasy, it's more of the sarcastic, take-it-or-leave-it kind.

Huston gives a powerhouse performance, and Bridges, always likeable, runs through his repertoire of facial expressions and grimaces, but it's a lost cause.

An excellent conspiracy thriller of unusual blackness and wit.

Winter Kills" isn't exactly a comedy, but it's funny. And it isn't exactly serious, but it takes on the serious business of the Kennedy assassination.

The film is funny, but it's frightening and vertiginous, too -- a complex tone that apparently left audiences baffled.

The satiric edge qualifies the film as a sick joke, which helps explain why the studio was reluctant to support it and why the public was reluctant to watch it. But it is audacious, and it's easy to see why it has developed a modest cult following.

... the maddest and most entertaining of Kennedy conspiracy thrillers, a wild kaleidoscope of clashing theories directed with wit and performed with gusto by an astounding cast.

Though it garnered little attention in theaters, it has become a cult favorite on video.

As an absurdist take on conspiracy thrillers, it's close to brilliant -- assuming you get the joke, which audiences don't seem to have in 1979.

A real cult classic, this reimagining of the Kennedy assassination asks what might have gone down in an alternate and very similar universe.

There are no featured audience reviews yet. Click the link below to see what others say about Winter Kills!