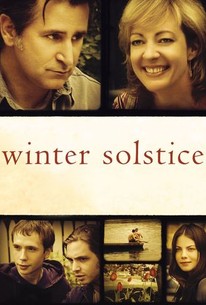 Critics Consensus: A deliberately paced, realistic portrait of a family's grief and healing.

Critics Consensus: A deliberately paced, realistic portrait of a family's grief and healing.

Critic Consensus: A deliberately paced, realistic portrait of a family's grief and healing.

A family struggles to come to terms with changes after a death in the family in this independent drama. Jim Winters (Anthony LaPaglia) is a widower living in suburban New Jersey with his two teenage sons, Gabe (Aaron Stanford) and Pete (Mark Webber). Pete, the younger of the siblings, has a hearing problem that has made school difficult for him; consequently, he has lost interest in his education and spends most of his time goofing off. Gabe is smarter and more ambitious, and has a stable relationship with his girlfriend, Stacey (Michelle Monaghan), but is beginning to chafe at the limitations of small-town life. And five years after his wife's death, Jim still hasn't been able to pick up and start his life over again. When Gabe announces he's decided to move to Florida, it has differing effects on those around him -- Stacey, hurt and confused, begins to withdraw; Pete strikes up a friendship with one of his teachers (Ron Livingston); and Jim struggles to work up the nerve to talk to his new neighbor, Molly Ripkin (Allison Janney. Winter Solstice was the first feature film from writer and director Josh Sternfeld; it won enthusiastic notices following its screenings at the 2004 Tribeca Film Festival.

Rocco Rosanio
as Pete's Friend No. 1

Tim Dowlin
as Friend No. 2

Ultimately undercut by its fictional elements and its flat characters.

This movie deserves to be seen -- and learned from. It captures the moments in which each of us stares out across an emptiness, searching for a connection that will keep us from falling.

It's the kind of narrow-gauged drama that either will drive you crazy or absorb you in its low-key rhythms. Mostly, I went along for the ride.

The chill in the air is deadening for the viewer.

It has everything an indie film could desire -- except for a compelling plot or dramatic tension.

Audiences may not get too excited about devastated people who conduct their social lives at the local Dairy Queen.

Winter Solstice is an intense drama and all the action is internal. LaPaglia is such a fine actor and every nuance of his bottled up Jim comes through, as he struggles to not only be a good father, but to find a direction in his own life.

Winter Solstice thrives solely on how much understatement you can actually handle in a movie.

Something that's increasingly rare: a stringently subtextual drama....when they finally arrive, the epiphanies are small ones.

Solstice offers solace. It is quiet, understated and powerful as a single chapter in several changing lives.

Not very exciting, but a pretty accurate depiction of what a real persons life is like. And as such there was really no plot, or climax, or ending. Still somehow it wasn't boring, so they did something right.

A great film! Very touching story about a widower and his two sons, and the struggle to have to overcome to get over the death of a wife and mother.

Story about dealing with a loss in the family and the difficulties of parents understanding teens and vice versa. There is a certain slowness or lulling rhythm to the film