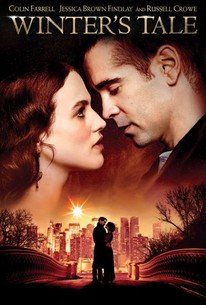 Critics Consensus: Winter's Tale tries to retain the grandiose sweep of its source novel, but fails to fill it in with characters worth rooting for or a sensible plot.

Critics Consensus: Winter's Tale tries to retain the grandiose sweep of its source novel, but fails to fill it in with characters worth rooting for or a sensible plot.

Critic Consensus: Winter's Tale tries to retain the grandiose sweep of its source novel, but fails to fill it in with characters worth rooting for or a sensible plot.

Will Smith
as Judge

Maggie Geha
as Girl in Bed

A fine book fights gallantly to escape from its straitjacket, but eventually lies down and allows itself to be trampled underfoot by bad ideas.

Findlay narrates in huge chunks of religiose voice-over. "Nothing has been without purpose - nothing," she concludes. Well, perhaps not nothing.

The introductory voice-over... generously still gives you time to dash back to the foyer and demand your money back to watch something less stomach-churning - like escalators going up and down.

Unfortunately, the film's magical- realist approach comes off as kitsch and preposterous.

If these actors felt they owed Goldsman a debt, they've paid it in full.

How could this film be made worse? Only by giving Lucifer a scene with Lucifer Jr played by Jaden Smith.

[Unfortunately,] Winter's Tale falls very flat, and unless you are watching it for the actors, don't pay money for this movie.

The film would have been much better off sticking with an eternal love story or having the protagonist fulfill his future destiny that is connected to his past. Winter's Talefeels distant and disconnected. It should have been magical.

A frustrating movie. It overly complicates a boy-from-the-wrong- side-of-the-tracks-meets-rich-girl story with a bunch of hocus pocus that wastes some good work from Farrell, Findlay and Russell Crowe.

Goldsman's writing is not up to par here with dialogue that is clunky, simplistic, and at times downright befuddling.

It was like a third-grader wrote a book report on the book and then they made a movie out of that book report.

I was constantly confused.

This is not a true story. This is true love. Mediocre Movie! Swimming somewhere in the reams of quite lovely footage assembled by Goldsman and his cinematographer Caleb Deschanel, there's a great movie with great ideas. Once in a while, it bursts through - in the shadowy, dank dungeon of a demon's lair, ruled by Lucifer himself; or the snow- swept sparkle of a moonlit night - but, more often than not, it turns into Winter's Tale: an emotionally distant romantic drama that goes for lush, sweeping depth but comes up curiously cold and myopic New York City is subsumed in arctic winds, dark nights, and white lights, its life unfolds, for it is an extraordinary hive of the imagination, the greatest house ever built, and nothing exists that can check its vitality. One night in winter, Peter Lake (Colin Farrell), orphan and master-mechanic, attempts to rob a fortress-like mansion on the Upper West Side. Though he thinks the house is empty, the daughter of the house is home. Thus begins the love between Peter, a middle-aged Irish burglar, and Beverly Penn (Jessica Brown Findlay), a young girl, who is dying.

When I saw the trailer for this I thought this looked pretty good, and very different. While it is different, it didn't really work for me. It's very melodramatic and cheesy. But worse of all, it takes itself way too seriously. Had this movie had a real sense of humor, I think it could have been very good. It's hard to summarize, but it's about angels against demons, and it takes place over a century. The cast is good, but they've all done much better. In time, I can see people growing more fond of it. Hell, maybe another viewing or too and I would change my opinion. But based off my one viewing, I didn't care for it. Emily didn't really like it either, but she usually isn't into the movies with magic and stuff. I'd say the only movie that you could compare to this, in a weird way could be "Legend". But that is much, MUCH better. Good for a one time watch, but most people may not finish it.

Winter's Tale manages to be an enthralling drama that if you're looking for a mindless romantic drama, is worth seeing, but is a film that could have been better as well. Although I did like it, the film just gets a bit too confusing at times, I guess you have to suspend any logic here to enjoy, and if you do that, then you might find the film, mindless entertainment, which in the long run is exactly that. I wanted a film with a bit more depth to the story, and the idea here is quite good, but the story does fall short of its potential, and it leaves a bit to be desired. The cast do what they can to make this a pleasant experience, and like I said, it is, if you leave your brain at the door. The cast are entertaining, but at times, some aspects of the film feels strained, and it tries to outdo its ideas, which makes the story suffer a bit. Nonetheless, Winter's Tale is fun for what it sets out to do, and is worth a look if you have nothing else better to watch, just don't expect a grand romance film, as you'll be disappointed. The idea is great, but the script feels a bit strained, and the ideas never really materialize into something you can truly sink your teeth into. But if you're looking for a pleasant timewaster, Winter's Tale is good, yet never great. One might think how great the film could actually have been if a bit more effort could have been put into the story to really make it a standout dramatic picture. Enjoyable, but flawed, Winter's Tale is one of those movies that just is worth checking out, not in theatres, but on TV or rental. Colin Farrell is good here, but has made far better films, however despite this, he makes the film much better, and I quite liked him in the lead, as well as Russell Crowe. Entertaining viewing if you have nothing else to watch, Winter's Tale is one of those movies that makes you want a bit more out of the film.