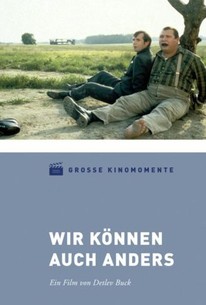 Most funny movies don't come across well in print, but with some the humor is almost impossible to discern in written form. This well-received German farce reportedly had its audiences in stitches. The clue, if there is one is in the performances of Joachim Król and Horst Krause as Rudi and Most Kipp, an ill-matched set of illiterate brothers on their way to investigate an inheritance from their grandmother in a formerly inacessible part of (east) Germany on the Russian border. While they are traveling there, they pick up Viktor (Konstantin Kotljarov), a hitchhiking Russian army deserter who is packing a large submachine gun and speaks not one word of German. When this odd trio drives into a confrontation with a batch or robbers, they fend them off a bit too enthusiastically, and soon they are being chased by the police.

Horst Krause
as Most Kipp

There are no critic reviews yet for Wir können auch anders... (No More Mr. Nice Guy). Keep checking Rotten Tomatoes for updates!

There are no featured reviews for Wir können auch anders... (No More Mr. Nice Guy) at this time.