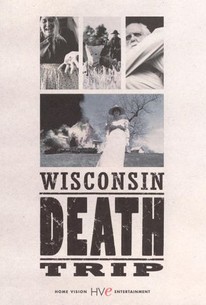 This film adaptation of Michael Lesy's 1973 book takes a look at the sordid and disturbing underside of life in a small Wisconsin community in the 1890s. In the early 1970s, Lesy discovered a large collection of curious photographs from Black River Falls, Wisconsin, taken near the end of the 19th century, and began doing research on the town in hopes of learning the story behind them. Lesy was startled by what he learned; over the course of a decade, Black River Falls fell victim to a severe diphtheria epidemic, the local economy collapsed following the shutdown of a mining business, a serial arsonist terrorized the community, a lunatic claiming to act under God's orders held 26 people hostage at the local church, two children murdered a farmer, a number of infants were abandoned or killed, and an undercurrent of violence and madness seemed to taint all aspects of the town's history. Using both the original photographs and silent recreations staged by director James Marsh (accompanied by narration from Ian Holm), Wisonsin Death Trip attempts to recreate the disturbing qualities of the photos and news clippings that formed the basis of Lesy's book. The film also features an original score by turntablist DJ Shadow.

Jeff Golden
as The Newspaper Editor

Bob Hirschi
as Man in Snow

Steve Strobel
as Man in Snow

Michaelangelo Materese
as Man in Snow

Thomas Jacobson
as Baby in Snow

Will Roshke
as 9-Year-Old Shooter

Joseph Dana
as Girl at Window

Darleen Gutknecht
as Woman in Carriage

Marsh's film alludes to the poor economy of the former mining town but has little else to say about potential causes or motivation. Marsh just piles the events on, as if there's black humor in their sheer volume. Nope, just a big boring pile.

The main problem with Wisconsin Death Trip is the way the format distances you from the subject matter, so that stories may shock, but they never move you.

Chillingly beautiful cinematography makes the state's landscapes appear timeless as it sets the stage for a grim history.

Those who pine for the presumed simpler life and upright morals of yesteryear's small-town Midwest have a rude, albeit wry, awakening in store with Wisconsin Death Trip.

Crisply photographed in black and white by cinematographer Eigil Bryld and extremely violent, it's the hellish flip-side to Little House on the Prairie.

Required viewing for anyone who thinks the modern media created the social ills that accost us so frequently today.

. . .a fever dream of a film that is haunting, capable of jarring moments of revelation about the timelessness of human nature. . .

If sitting in a library basement reading random newspaper articles on microfilm for two hours is your idea of a good time, then this movie has your name all over it.

An unsettling semi-documentary narrated by Ian Holm that chronicles the bizarre goings-on in and around the town of Black River Falls, Wis., between 1890 and 1900.

There are no featured audience reviews yet. Click the link below to see what others say about Wisconsin Death Trip!