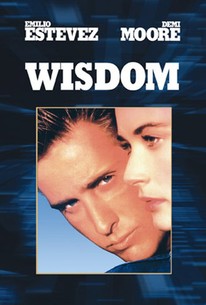 In this film, an old felony conviction comes back to haunt the young, ambitious John Wisdom (Emilio Estevez) as he applies and is turned down for a number of jobs. Frustrated by his attempts to make a legitimate living, John and his girlfriend, Karen (Demi Moore), set out to commit a series of bank robberies, using the money to ease the plight of down-on-their-luck farmers. Emilio Estevez wrote, directed, and starred in this feature.

Barbara Stamm
as Loan Officer at Bank No.1

Ron Presson
as Guard at Bank No.1

Erika Lincoln
as Woman on Street

Estevez Adds Another Trio of Actors to the "Bobby" Brigade
Estevez … Hopkins … Demi … and Bobby Kennedy?

Estevez writes terrible dialogue that makes the couple sound stupid rather than inspiring.

Estevez vs. Estevez to see whether he's worse as actor or director.

Emilio Estevez directs and stars in this movie as a sort of modern day Robin Hood type. I loved the story and Emilio does a fantastic job. I highly recommend this movie.