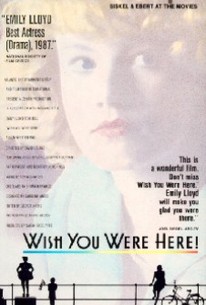 Wish You Were Here (Too Much) Photos

The British Wish You Were Here served as the auspicious film debut for 16-year-old Emily Lloyd. The scene is a British seaside community of the 1950s, where the local adults are shocked and embarrassed by the libertine Lynda (Lloyd), who dresses provocatively, behaves outrageously, and swears like a sailor (her favorite epithet is "Up your bum"). Lynda's mother is dead, and her father has given up trying to do anything with her. She attempts to hold down several jobs, but messes them all up through insolence and carelessness. Excessively promiscuous, Lynda has an affair with a middle-aged friend of her father's. She becomes pregnant, only to use her "fallen" state to gleefully shock and annoy her elders even more. Despite her bravado, there's an underlying sadness about Lynda: the title Wish You Were Here refers to her feelings concerning her late mother.

Georgi Vasilyev
as Mitch The Dog

Frederick Hall
as Passenger with Umbrella

Danielle Phelps
as The Baby

George
as Mitch The Dog
View All

Critic Reviews for Wish You Were Here (Too Much)

Wish You Were Here is the story of Lynda's messy coming of age. It's a movie to cherish -- bouyant, affecting, one of a kind.

As Lynda, the belligerent, exhibitionist daughter of a strait-laced British shopkeeper, Lloyd is electrifying. She's a foul-mouthed Hayley Mills.

Idyllic despite its inherent naughtiness, Wish You Were Here is a raunchy postcard from an age that exists largely now for filmakers to make of it what they want.

Just as Lynda's language is an affront to her neighbors, so is Leland's film an enthusiastic assault on the excessive gentility of so much British filmmaking.

Wish You Were Here may always be thought of as the movie that first gave us Emily Lloyd. Or as David Leland's first directing achievement.

What makes it interesting is the character of the heroine; her refreshing rudeness disconcerts those around her.

...grows more and more absorbing as it progresses...

It has a strange iconoclast charm. [Full Review in Spanish]

Newcomer Emily Lloyd, blond and mischievously lovely, is heartbreaking and irritating in equal parts as the hedonistic Lynda.

The script by director David Leland was the perfect vehicle for his young star [Emily Lloyd] who is alternately hilariously rude and vulnerable, an unusual mixture for a woman or girl character in films, TV or literature even today.

Although first-time director David Leland has a gold mine in Lloyd, he clutters the film with grotesque characters who give this small British town a surrealistic circus quality.

Leland has not, as I say, made up his mind as to which kind of film he is making, and so the mood of Wish You Were Here bounces uncomfortably back and forth between playful sass and grim decline-and-fall melodrama.

Audience Reviews for Wish You Were Here (Too Much)

I saw this one a long time ago, and I can't remember much about it except that it was one of those nostalgic but sexy kinds of movies about a high school girl who keeps getting into trouble or something. Anyway, I want to see it again.

Wish You Were Here (Too Much) Quotes