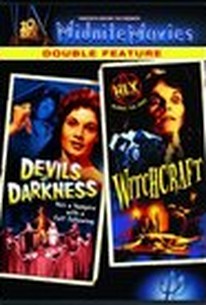 In this spooky horror film set in an old English village, the trouble begins when a man endeavors to dig up a cemetery containing the charred bodies of witches burned at the stake 300 years before. The warlock who looks after the family cemetery tries to stop him, but cannot. As soon as their graves are disturbed, the witches arise and strange things begin to happen to the family of the man who dug them up. Later the true culprit behind the mayhem is revealed. ~ Sandra Brennan, Rovi

There are no critic reviews yet for Witchcraft. Keep checking Rotten Tomatoes for updates!

This is one I need to watch again, I remember it being good, but I don't remember why!