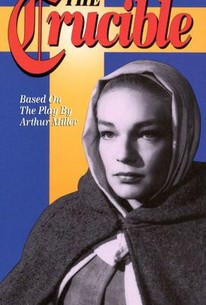 American playwright Arthur Miller was still under an "unfriendly" cloud in 1958, so far as the anti-Communist brigades were concerned. Thus, the film version of Miller's stage play +The Crucible was lensed in France. Drawing several parallels to the McCarthy era, Miller dramatizes the Salem Witch Trials of the late 17th century, when hearsay, rumor, and mass hysteria passed for hard evidence. Given an opportunity to escape being hanged for witchcraft, John Proctor (Yves Montand) refuses to bow to the demands of the so-called justices. Many observers felt that this climactic scene was an act of contrition for Arthur Miller, who was (by his reasoning) not nearly so courageous when grilled by the HUAC. Also known as The Witches of Salem, The Crucible was adapted for the screen by Jean-Paul Sartre.

News & Interviews for Witches of Salem

View All Witches of Salem News

Critic Reviews for Witches of Salem

Despite the excessive length... of his adaptation, Jean- Paul Sartre's Les Sorceres de Salem has lost Miller's poetry and insight into character.

Audience Reviews for Witches of Salem

There are no featured audience reviews yet. Click the link below to see what others say about Witches of Salem!