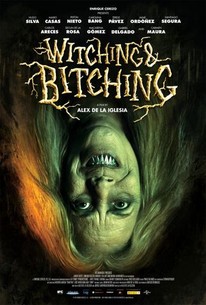 When your marriage has you on the brink and your bank account in red, it's time to rob a Cash-for-Gold shop. That's the last-ditch decision made by a group of desperate guys led by divorced dad JOSÉ. They make it out of the shop with a bag full of 25,000 gold wedding rings and flag down a cab. So do they run south to Morocco? Not easy getting through with a cab... Looks like it's north to France. The guys enter the impenetrable forests of Basque Country, home to ancient covens and witchery. They run head-on with a horde of crazed women who feed on human flesh. Trapped in a mysterious mansion, the witches try to seize the rings at all cost and to rip out our heroes' souls to boot. (c) Film Factory

Carlos Areces
as Conchi
View All

News & Interviews for Witching and Bitching

Justin Timberlake + The Tennessee Kids, Goliath Season One, and More Available to Stream
Critics Consensus: How to Train Your Dragon 2 is Certified Fresh

View All Witching and Bitching News

Critic Reviews for Witching and Bitching

"Witching and Bitching" is accordingly overlong, and conceptually thin. But like most of de la Iglesia's films, it's also freakishly energetic, and often hysterical.

The buddy comedy, gross-out humor and horror elements make for a harmonious mix.

A simple yet utterly bonkers battle of the sexes that chuckles at male chauvinism before castrating it completely.

Projectile pukes its outrages at you with a gusto recalling the early days of those (sadly) reformed upchuckers Sam Raimi and Peter Jackson.

Despite its noted cast members, Witching and Bitching is too long to sustain its wispy narrative.

It was exciting, suspenseful, creepy, and truly hilarious. The situations these men get themselves into over and over again keep you laughing from start to finish, without being too hokey.

Politics aside, the film is silly and fun.

A messy but highly enjoyable romp that takes a sideswipe at modern Spanish attitudes and the country's economic turmoil.

There's definitely a line between decadence and over-indulgence, and where The Last Circus was certainly the former, Witching and Bitching is unfortunately the latter.

Audience Reviews for Witching and Bitching

Incredibly unique and subversive Spanish horror-comedy that adds a new and clever twist to the battle of the sexes. It's certainly a subversive examination of how men and women interact with each other and all the baggage that comes with that. But, at the same time, this film offers such an entertaining package. It's not so much a horror film as it takes and mixes several genres, including horror, black humor, satire, violence, etc, into one insane whole. This isn't unfamiliar territory, thematically at least, for Alex De La Iglesia, so he's clearly the one person you would want to helm a picture like this. Granted, he also had a hand in developing the script, so his trademarks are all over the place. What I like about the film is that while it's a subversive satire about gender relations, is the fact that the film makes absolutely no qualms about what it is. It has no delusions of grandeur, but it does know that its energetic pace and hilarious dark comedy will get it farther than most. This is a midnight movie that's not ashamed to be seen as one. It's exceptionally well-made, the film is a visual feast. It would almost have to be since the film, while smart and unique, is longer than it should've been, probably by about 10 or so minutes. So the scripting can sometimes come across a little bit thin and, to some people, the film may play its idea out sooner rather later. The film certainly mixes various genres together, but it's all dark, violent, and sexual. That can be tiring to some people. But I'm not really gonna complain because I found this film to be an absolute blast. I had so much fun watching this movie. It's one of those movies where I would have no problem watching it once every year around this time. The cast clearly had a blast even if the material could be considered, by some, to be taboo and in some cases blasphemous. But, I believe, that great comedy finds a way to push the boundaries of good taste. That's not always true, but it's true in Alex De La Iglesia's films. The further he pushes his films into what some would consider poor taste then the better they are. This film is no different, it's often a very hilarious film. It's missing something, but I did have a great time watching this film. I greatly recommend it if you're a genre fan, if you like light, fluffy, and agreeable comedies, then this is definitely not for you.