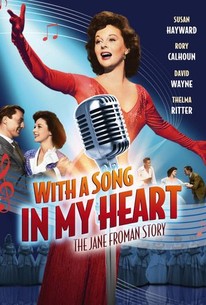 With a Song in My Heart Photos

With a Song in My Heart is the story of popular 1930s songstress Jane Froman, here portrayed by Susan Hayward. We first see Ms. Froman as a humble staff singer at a Cincinnati radio stations, but it doesn't take her long to rise to the uppermost rungs of network radio fame. Jane gratefully marries her agent (David Wayne), but soon both realize they're not truly in love. While touring with the USO during World War II, Jane is in a plane crash, which severely injures her. She nonetheless valiantly makes a professional comeback, and begins a relationship with the pilot (Rory Calhoun) who rescued her. Jane Froman herself provided the vocals for With a Song in My Heart, with Susan Hayward doing a topnotch miming job. Watch for Robert Wagner in his starmaking cameo as a shell-shocked GI.

Jane Froman
as Herself [singing]

Robert Easton
as Kansas
View All

Critic Reviews for With a Song in My Heart

While it goes not have quite the impact of The Jolson Story, it is nevertheless a craftsmanlike job.

Just about as grandiose and mawkish as Hollywood homage can be.

While not entirely at home in the dancing accompaniment to some of the production numbers, Susan Hayward punches over the straight vocal-simulation and deftly handles the dramatic phases.

Hideously schmaltzy and Hayward's not exactly anyone's idea of musical sparkle. But what songs!

Five-time Oscar nominee Hayward, as always, gives her best, making With a Song in My Heart a satisfying film on all levels.

An immensely popular movie, finely performed and intelligently crafted, and typical of the 20th Century-Fox period biopic at its professional best.

Audience Reviews for With a Song in My Heart

A tad bit overly sentimental. Susan Hayward cannot be blamed and makes the most of a contrived story.

With a Song in My Heart Quotes