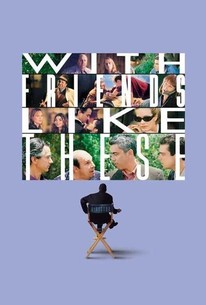 Life among insecure, middle-aged character actors, former New Yorkers in L.A., is the main plot focus of this Philip Frank Messina comedy about four friends who want the same role in the next Martin Scorsese gangster flick. Balding Johnny DiMartino (Robert Costanzo) is so excited by the news of a possible part as Al Capone in a Scorsese film that he informs ladies' man Dorian Masstandrea (Jon Tenney), who cheats on his wife Samantha (Elle Macpherson). Dorian immediately makes moves to get his own audition. Johnny goes to Armand (David Strathairn) for coaching in Sicilian characteristics, and he worries that his look-alike, Rudy Ptak (Jon Polito) will get the part. Steve Hersh (Adam Arkin) tries to get through to Scorsese, although his wife Joanne (Laura San Giacomo) is convinced he doesn't have a chance. Cameos by Bill Murray and Scorsese (portraying himself at the audition). Shown at the 1998 Santa Barbara Film Festival. ~ Bhob Stewart, Rovi

The incessant betrayals and confidences become monotonous after a time, and the film sinks into the familiar swamp of suburban futility.

The movie works as well as it does because the cast knows the material so intimately.

Plot and characterization are drawn strictly off the rack.

Writer-director Phillip F. Messina's insider comedy about Hollywood almost-rans gives off an air of clammy desperation that feels all too authentic without being especially funny and bogs down early in repetitive shtick.

An accomplished farce populated by sly and knowing comedic performances.

There are no featured reviews for With Friends Like These at this time.