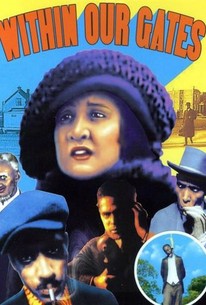 Within Our Gates Photos

This film is one of the earliest surviving examples of a film by an African American filmmaker. Sylvia Landry is engaged to a black soldier, but her rival Alma Pritchard arranges for him to catch Sylvia in an innocent but compromising situation. No longer engaged, she moves to the South to work as a teacher in an all-black school. When the school has financial problems, she returns to Boston to raise money for it. There, she is befriended by a white doctor, Dr. Vivian, who falls in love with her. In a flashback, her rival tells the doctor how Sylvia lost her family. Sylvia's father was unjustly accused of murder, and her parents were lynched. Micheaux was not a great artist, but his films are important because they dealt with issues that the mainstream "white" studios ignored. The only surviving print of Within Our Gates was found in an archive in Spain, and the titles had been rewritten in Spanish. When translated back to English, plot points may have been lost. On the other hand, the last third of the film is a haunting flashback to the death of Sylvia's parents. The scenes of the lynch-mob beating one man to death and hanging Mr. and Mrs. Landry are still powerful today, and the film is highly critical of blacks who betray their race to earn favor with the white dominant society.

Critic Reviews for Within Our Gates

Micheaux's narrative manner is as daring as his subject matter, with bold flashbacks and interpolations amplifying the story ...

Though the narrative structure is somewhat choppy, director Oscar Micheaux otherwise demonstrates mastery of the silent form, using supple compositions and careful editing to amplify the characters' emotions in a manner that makes sound seem superfluous.

Within Our Gates is full of surprises, following a multitude of characters and plotlines without settling into predictable allegiances.

Micheaux's films are about murder, racial injustice, and lynchings.

The clever intercutting of this climax intentionally unpacks the racist ideology of D.W. Griffith's similarly constructed The Birth of a Nation.

Audience Reviews for Within Our Gates

Oscar Micheaux is a pioneering African American filmmaker. He was also a novelist. This is his second silent feature, but earliest surviving film. He wrote, directed, and produced this contemporary tale of the African American experience just after World War I. Sylvia (Evelyn Preer) is our heroine. She is betrayed romantically by her cousin in the North, returns home to learn of school funding problems for the children of the mostly illiterate sharecroppers of the South, returns to the North to collect donations for this cause where she is briefly injured after meeting a new romantic interest, and eventually secures money from a kindly white woman. Micheaux is not interested in one-dimensional characters; we see some characters act in certain ways that were acceptable to white people in power, but then we get a glimpse of their true feelings when the white character has gone, so racial prejudice is not ignored. With few opportunities available to them black men are caught up in gambling, the ministry, or servile work. Micheaux avoids obvious stereotypes even though certain character types that would be recognized from literature help in the shorthand of silent storytelling. In this era a white cop is not a sadistic villain, and while one rich racist society lady tries to sway Mrs. Elena Warwick, the sympathetic philanthropist, away from her intention to fund the black school, Micheaux wishes to show that with Sylvia ad Mrs. Warwick working together progress can be made in society. I saw a low resolution copy on YouTube although I'm aware that a better quality transfer from surviving film has been released on DVD. The original title cards have been lost, so others have been substituted and they are quite clunky. Within Our Gates offers a unique perspective of an often ignored segment of America's population.

Thought to have vanished until a single Spanish copy was found in the 1970's, it's a miracle this movie still exists, and it's the oldest surviving film made by an African-American director. That in and of itself makes it very special. It belongs to the genre referred to as 'race films' - movies made by African-Americans for African-American audiences between 1915 and 1950 - the vast majority of which are sadly no longer with us. I'll say up front that the movie is a little scattered, and the acting is mediocre at best - but viewers need to realize this was par for the course for movies in 1920, and this is a rare film from the period that actually has something to say. One of Micheaux's messages is that African-Americans need to be educated and to be allowed to vote in order to rise and have any real power in a country dominated by whites - a country that he still believed in despite its racism, that African-Americans had recently fought for in WWI (albeit in segregated troops), and one he points out they were never immigrants in. In the film there are whites who want to help, and quite generously, and there are also whites who want to keep African-Americans in their place, rationalizing that this will keep them happier, that they have no capacity for anything other than field work. The thought of women's suffrage (which would finally pass into law later in the year the film was released) is repellant to one white woman because she fears African-American women would also have the right to vote. Even more notoriously, there is a mob of whites who lynch a black family, as well as one who attempts rape in scenes which are both powerful and absolutely harrowing. Micheaux shows us the cruel injustice of what were common practices, an ugly part of our history that is hard to acknowledge even today. When the film was released, it was highly controversial for those scenes, and banned or edited in some places. What I was a little surprised by was Micheaux also showing us the negative effects of several African-Americans on their own culture - there is a gambler and thief known as "The Leech", a preacher who urges his congregation to be happy with their place in life because the country belongs to the white man and Heaven will be their reward instead, and a servant who incites whites with misinformation. The latter two endure humiliation with a smile, and Micheaux gets across the point that these variations of 'Uncle Tom' are selfish, helpful to themselves in the short term, but harmful to the culture. I took it as a brilliant call for strength and unity. Micheaux can't help himself in giving some of the characters what they deserve, examples of which are the actual killer for the murder being pinned on an African-American being shot in the hunt, and a little African-American boy escaping the lynching on horseback. While artistically some of these seem questionable, in this case they're probably necessary, because the film would have been far too depressing otherwise. Silent movies from this time period are often hard to watch, they come across as quaint and dated, and the filmmaking seems amateurish by today's standards. 'Within Our Gates' is certainly flawed, but it's a priceless expression of the African-American experience in 1920, and should be seen.

This is a film that will forever be famous for the fact that it is the oldest surviving film directed by an African American. It will forever be shown in retrospectives of African American cinema and as a counterpoint to D.W. Griffen?s The Birth of a Nation. It is probably destined to be more of a historical artifact than as a work of art, but is that such a bad thing? I?ve always been fascinated by history and seeing this film?s context is more than interesting enough to justify a two hour watch. But all this isn?t to say that this is a bad movie in and of itself. It?s a perfectly competent movie from a filmmaking perspective, and while the story is a bit preachy I think that?s probably fair enough, when you?re fighting against the likes of The Birth of a Nation you sort of need to shout.

Within Our Gates Quotes