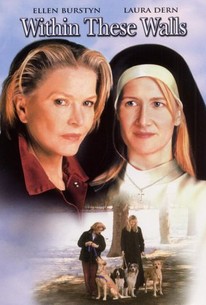 A woman behind bars learns to reach out to someone with whom she has almost nothing in common as she begins to help others in this made-for-TV drama, inspired by a true story. Joan Thomas (Ellen Burstyn) is a woman whose life has been a long trip down a rough road; Thomas has a problem with drugs, and after being arrested for possession, she's sentenced to prison with a number of hardened criminals. Sister Pauline Quinn (Laura Dern) is a nun working with prison inmates who senses Thomas is at heart a good person whose life can still be turned around; while Thomas proves to be a tough nut to crack, in time Quinn is able to interest Thomas in a special program in which inmates help train dogs which will be used to help the handicapped. As Thomas works with Quinn and helps teach her dog the needed skills, she learns the positive aspects of connecting with others for the first time. Within These Walls was originally produced as part of the award-winning television anthology series The Hallmark Hall Of Fame; it first aired on August 20, 2001.

Karen Glave
as Off. Byrd

Critic Reviews for Within These Walls

... Burstyn and Dern would be worth watching in a phone booth.

There are no featured reviews for Within These Walls at this time.

Within These Walls Quotes