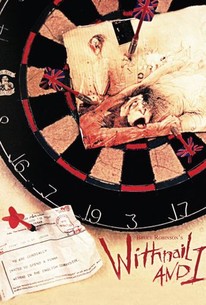 Critics Consensus: Richard E. Grant and Paul McGann prove irresistibly hilarious as two misanthropic slackers in Withnail and I, a biting examination of artists living on the fringes of prosperity and good taste.

Critics Consensus: Richard E. Grant and Paul McGann prove irresistibly hilarious as two misanthropic slackers in Withnail and I, a biting examination of artists living on the fringes of prosperity and good taste.

Critic Consensus: Richard E. Grant and Paul McGann prove irresistibly hilarious as two misanthropic slackers in Withnail and I, a biting examination of artists living on the fringes of prosperity and good taste.

Withnail and I Photos

Screenwriter Bruce Robinson made his directorial debut with this British comedy. Withnail (Richard E. Grant) is an unsuccessful, pill-popping actor; "I," or Marwood (Paul McGann), is Withnail's roommate and another equally underemployed actor. The time is 1969: Withnail is fast becoming a burned-out relic of the '60s, while Marwood is trying to reassimilate into society. The two take a trip to the country in hopes of rejuvenating themselves, but things go from worse to even worse. Given the intimacy and insight of the screenplay and dialogue, one shouldn't be surprised that Bruce Robinson (who adapted the film from his own novel) based Withnail & I on his own experiences. The film proves that certain "Age of Aquarius" types were just as bollixed-up in Britain as they were in America.

News & Interviews for Withnail and I

View All Withnail and I News

Critic Reviews for Withnail and I

It's much funnier, and sadder, watched stone-cold sober.

Set in 1969 England, it portrays the last throes of a friendship mirroring the seedy demise of the hippie period, delivering some comic gems along the way.

It is at once a coming-of-age comedy and a fond farewell to an era.

A modern classic? A brilliant vignette of a certain time and attitudes? A self-indulgent jeu d'esprit? One thing is certain: Richard E. Grant touched greatness.

A biting script from writer-director Bruce Robinson and performances from Richard E Grant and Paul McGann as two 'resting' actors, Withnail and 'I', that neither has surpassed.

Grant - a teetotaller - delivers the performance of his life as the doomed thesp, whether it be demanding the "finest wines available to humanity", downing lighter fluid, or feeling like a pig shat in his head.

A brilliantly funny, enduring classic with an unforgettable performance from Richard E Grant.

If you are in the right mood, it is simply impossible not to fall for this hilarious tale of two hard-living losers.

Certainly the funniest and possibly the truest comedy about male friendship.

Every line is sharp, and the whole film finely judged and well paced.

A career high for all concerned, including '80s British cinema.

Audience Reviews for Withnail and I

What elevates this British comedy above being a mere series of funny situations is Richard E. Grant, who embraces his role with a hilarious performance and makes this a hysterical film full of memorable lines and moments, even if some of the gags lack a proper punch line.

Utter hogwash from start to finish.

Withnail and I is set in an old, run down student flat in London's Camden Town at the end of the 1960's. Withnail and I are a couple of unemployed actors from different ends of the social spectrum. Withnail is a Harrow educated dilettante, and rather upper crust; his flatmate Marwood is a grammar school boy with a slightly more realistic outlook on life. To escape from the squalor of their grim, unemployed, existence in Camden Town, soaked in a near lethal cocktail of alcohol and drugs, the desperate pair call upon the generosity of Withnail's uncle Montague and secure the use of his cottage in the country for a weekend. Uncle Monty is an eccentric middle-aged homosexual, who prefers vegetables to flowers. He considers that 'flowers are essentially tarts - prostitutes for the bees', and wears a radish in his buttonhole in preference to a flower. He grows vegetables in pots in his Chelsea house, and makes suggestive references to 'firm young carrots'. Withnail (excellently played by Richard E. Grant), persuades Uncle Monty (a superb Richard Griffiths) to lend Marwood (a convincing Paul McGann) and him his cottage in the country for the weekend. Their exploits at the cottage, and in Penrith where they spend their Wellington boot money on booze and try to sober up in a gentile tearoom are memorable, witty and entertaining. The incongruous uncle Monty reciting Baudelaire in the Cumbrian hills, seeking carnal knowledge of Marwood (apparently coerced by the cowardly and treacherous Withnail), are testament to the writing skills and humour of author and director, Bruce Robinson. The film's soundtrack brings us 'A Whiter Shade of Pale', played by King Curtis on the Saxophone, 'My Friend' and 'Walk hand in Hand', performed by Charlie Kunz, 'Schubert's Piano Sonata in B Flat Major' performed by Leslie Pearson, 'All Along the Watchtower' and 'Voodoo Chile', by Jimi Hendrix, 'Hang Out the Stars in Indiana', performed by Al Bowlly, and 'While My Guitar Gently Weeps', by the late lamented George Harrison, who provided much of the financial backing for this memorable film. This is a thoroughly entertaining 108 minutes of humorous entertainment, a few too many drinks, a convincing 60's atmosphere, superb performances from the excellent cast, and music to make your heart, and your guitar, gently weep. Thank you, George Harrison.

Withnail and I Quotes