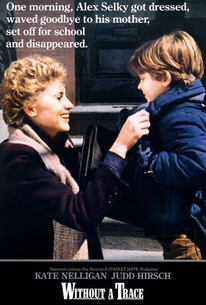 Without a Trace Photos

Young divorced mother Kate Nelligan refuses to go into a panic when her six-year-old son disappears. She manages to maintain an even emotional keel even when detective Judd Hirsch unearths several clues which point to sexual molestation. After several false leads, the truth is revealed. We won't divulge the ending, but we will note that we found it pretty hard to swallow-especially when compared to the actual case upon which Beth Gutcheson's novel and screenplay were based. Despite its cop-out denouement, Without a Trace deserves to take its place among such superior missing-children dramas as the made-for-TV Adam and Just Another Missing Kid.

Lynn Cohen
as Woman with Dog

Carolotta A. DeVaughn
as Correction Officer

Hattie Winston
as Reporter
View All

Critic Reviews for Without a Trace

There is a beautifully sustained performance from Kate Nelligan as the mother who would not abandon hope.

Exceptionally strong performances take this above the level of the script.

...as the story progresses, the film becomes increasingly routine...

Kate Nelligan's performance is as sharp and focused as a laser beam.

Audience Reviews for Without a Trace

Without a Trace Quotes