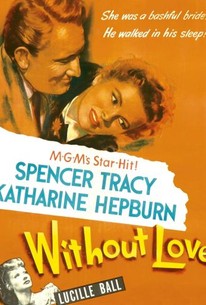 In their third film together, Spencer Tracy and Katharine Hepburn created one of the box-office sensations of 1945, a sparklingly witty wartime comedy about a marriage entered on the theory that love only gums up a relationship. Invited by a drunken Quintin Ladd (Keenan Wynn), devoted scientist Patrick Jamieson (Tracy) moves into the Washington mansion belonging to Ladd's cousin Mrs. Jamie Rowan (Hepburn), a widow, who, it soon appears, shares Pat's distaste of romantic love. Highly interested in the scientist's attempt to develop a high-altitude oxygen helmet for the war department, and tired of being hit on by men, an emboldened Jamie proposes marriage to Pat, insisting that theirs should be a union uncomplicated by love. Pat readily agrees and the two settle into a seemingly well-functioning life of shared passion for the oxygen experiments. But when Pat's former girlfriend turns up, Jamie discovers that she has fallen in love with her husband after all and attempts to win him back. The ploy, however, seems to backfire -- or does it? Originally written for Katharine Hepburn by her frequent collaborator Philip Barry, Without Love had enjoyed a moderately successful run on Broadway from 1942-1943 with Elliott Nugent as the scientist. The much more successful screen version became the final film of MGM contract director Harold S. Bouquet, who died of cancer soon after. ~ Hans J. Wollstein, Rovi

Hazel Brooks
as Girl on Elevator
View All

Critic Reviews for Without Love

Without Love may not be as memorable as their other work but being able to watch Tracy and Hepburn is worth a viewing.

So droll and casually paced that it often seems to disappear within itself, but the care with which director Harold S. Bucquet treats the central relationship is apparent, and Tracy and Hepburn consistently shine.

Keenan Wynn is hilarious as a drunken pal, while Lucille Ball scores as a sharp-witted friend.

Fails to convert to the cinema.

Audience Reviews for Without Love

A great Hepburn and Tracy movie. He's a scientist who doesn't have time for love, she starts to help him out with his experiments, and they unintentionally fall for each other without realizing it. A fun movie.

Not their best but a good film from the pair. Lucy and Keenan offer excellent support.