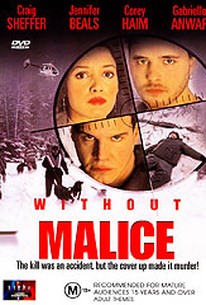 Two men try to cover up an accident with a lie and find that the lie makes the accident seem that much worse in this tense drama. Paul Venters (Craig Sheffer) is a self-centered plastic surgeon who is soon to be married to beautiful Susan (Gabrielle Anwar), but doesn't get along very well with his fiancée's family, particularly Susan's brother Marty (Corey Haim), an ex-con who is trying to stay clean after beating a nasty drug habit. To appease his future wife, Paul tries to mend fences with Marty by inviting him along for a camping trip in the Canadian wilderness. While looking for elk, Paul sees a large bear that's heading towards Marty; thinking the animal is about to attack, Paul fires several shots at the bear, but one of them manages to kill a nearby forest ranger on patrol. Afraid that no one will believe the truth -- especially given Marty's past arrest record -- Paul and Marty cook up a fraudulent story to explain the ranger's death, but when park warden Samantha Wilkes (Jennifer Beals) looks into the case, their web of lies begins to unravel, with dangerous consequences. Filmed on location in Canada, Without Malice also features Ian Black and Blaine Hart.

Critic Reviews for Without Malice

There are no critic reviews yet for Without Malice. Keep checking Rotten Tomatoes for updates!

There are no featured reviews for Without Malice at this time.