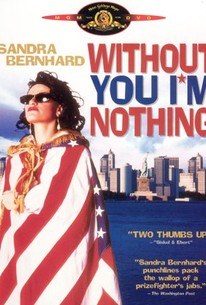 Without You I'm Nothing Photos

In this stylized adaptation of her 1988 off-Broadway show, singer/actress/comedian Sandra Bernhard explores celebrity, stereotypes, and her own childhood in a series of monologues and musical numbers. Although much of the material comes straight from the original stage show, Bernhard and co-writer John Boskovich updated many of her pop-cultural musings and added several new production numbers. They also turned a one-woman show into something of a mockumentary, staging interviews with Bernhard's fictional manager (Lu Leonard) and adding several additional characters. Most of the action is staged in a theater full of well-heeled African American patrons who slowly leave in disgust at Bernhard's performance, which includes her deadpan fantasies about an imagined gentile childhood, a dalliance with Warren Beatty, and a trip to Studio 54. Originally given a limited release by New Line Cinema in 1990, Without You I'm Nothing was quickly pulled from theaters when the company that produced it went bankrupt. Eventually, however, it made its was to home video and DVD.

Sandra Bernhard
as Herself

Steve Antin
as Himself

John Doe
as Himself

Critic Reviews for Without You I'm Nothing

The conclusion of Sandra Bernhard's Without You I'm Nothing is one of the rarest, strangest film finishes in the history of the medium.

Parts of it are funny, parts of it are moving, and parts of it are uncomfortable and off-putting. It's not a jolly night out at the movies. My first reaction, frankly, was that I wasn't enjoying myself. Then I analyzed that feeling.

It is, like much of the best visual, film and performance art being done today, entertaining on a mass-appeal level and radical, subversive and challenging.

I think the world of entertainment can always use a few angry, gifted oddballs like Sandra Bernhard.

Audience Reviews for Without You I'm Nothing

Sandra Bernhard is interesting but this film is less so. Sometimes the full extent of a personality can be lost in the hands of a lesser biographer and I'm not sure that Boskovich succeeds here despite the fact that Bernhard co-wrote this piece.

Without You I'm Nothing Quotes