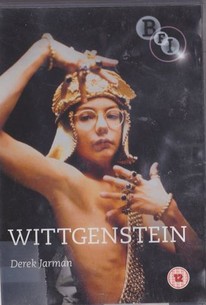 Derek Jarman directed this witty, stylish biography of the life of the eccentric 20th-century philosopher Ludwig Wittgenstein (Karl Johnson). Wittgenstein is shown as a boy living a repressive youth, demonstrated by his family appearing in Roman togas. When Wittgenstein leaves to study under Bertrand Russell at Cambridge, he begins to investigate language and apply the strictures and constructs of language to philosophical study. The subject of Wittgenstein's homosexuality is depicted when, after World War I, he falls in love with a poor philosophy student, Johnny (Kevin Collins). Also portrayed is Wittgenstein's death at an early age from prostate cancer.

Derek
as Model
View All

Jarman uses a black box set to make time and place irrelevant while foregrounding the true stars of the film - the human mind and Sandy Powell's brilliantly eccentric costume design.

Johnson tore into his role like a hungry barnyard dog into a carcass.

One of Britain's most famous avant garde filmmakers, Derek Jarman, constructs a biopic of Viennese philosopher Ludwig Wittgenstein with a bravura display of visual imagery