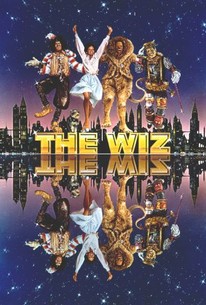 Critics Consensus: This workmanlike movie musical lacks the electricity of the stage version (and its cinematic inspiration), but it's bolstered by strong performances by Diana Ross and Michael Jackson.

Critics Consensus: This workmanlike movie musical lacks the electricity of the stage version (and its cinematic inspiration), but it's bolstered by strong performances by Diana Ross and Michael Jackson.

Critic Consensus: This workmanlike movie musical lacks the electricity of the stage version (and its cinematic inspiration), but it's bolstered by strong performances by Diana Ross and Michael Jackson.

Dorothy, a young African-American kindergarten teacher leaves a large family dinner one night to chase after her dog during a New York City snowstorm and gets swept up by a cyclone and transplanted to the urban version of the land of Oz.

Thelma Carpenter
as Miss One

Richard Pryor
as The Wiz

News & Interviews for The Wiz

View All The Wiz News

Critic Reviews for The Wiz

So much wit and talent and energy crowd the screen in this lavishly filmed variant of the Oz story that it is depressing to realize that the production never had a chance.

Director Sidney Lumet has created what amounts to a love letter to the city of New York, which he equates with Oz.

It's good that the Scarecrow is the first traveling companion she meets; Michael Jackson fills the role with humor and warmth.

If you can take it just as an occasion for the exercise of some real talents, a good time can be had much of the time.

Sidney Lumet's spectacular, joyous production of The Wiz generates a mood of wonder and sentimental rapture recalling the arrival of the Mother Ship in Close Encounters of the Third Kind.

On the plus side are vast, brilliant sets by Tony Walton, a couple of well-staged show-stoppers, Michael Jackson, Richard Pryor, and Diana Ross who, as Dorothy, is just gorgeous.

All that money and all that talent, and nobody really knew what to do with it except the art director.

Sidney Lumet's lack of film imagination makes him fail in a genre as imaginative as the musical... The movie completely loses its undeniable appeal. [Full Review in Spanish]

It's easy to see why director Sidney Lumet's clunker ranks as one of the most expensive movie flops of all time.

The Wiz can't quite get it together. Nonetheless, this trip up the yellow-brick road has something to please almost everyone.

Despite its marvelous personnel and terrific premise, The Wiz is a bungled mess.

As Ross takes a final star turn against a black background and her tears fall and she lets fly a homily about home, it's easy to understand why Aunt Em wants her out of the house.

Audience Reviews for The Wiz

With the charm bringing by the stars and the director Lumet, The Wiz, isn't a film really good. Showing along the picture an expectable end and apparent offend the intelligence of the audience, just like the scenes where Scarecrow, desperate for a brain, clearly presents beautiful citations and most of the ideas, as like Tinman crying and want a heart and the coward Lion exhibit an great courage. Neither L. Frank Baum's novel and the 1939 version show to be so expectable. The screenplay by Joel Schumacher are weak, but in some moments presents criatives parts. The dog that make the character of Toto is terrible too with awful trained, Ross have a few good scenes, but her acting flaw too, Dorothy looks old and neurotic. The slowed and dramatic song perform by her leave the film boring and rotten, by the way the "Ease On Down the Road" sing by Dorothy and Scarecrow are very good, but very repeat. Another songs are nice, what better the movie, the same thing with the art direction, cinematograhy and costumes are perfect. Richard Pryor and Ted Ross presents a good actings too, for me the best in the picture. The Wiz is a nice movie, but could be much, much better. Anyway Sidney Lumet's version impress for his criative dark humor, some good songs, the all cast formed of black actors - another criative thing in this film -, the art direction and the hard attempt of Schumacher and Lumet on make an terrific movie, what unfortunately isn't, but this is for me a little cult piece of art with surrealism and smart minds. Rotten.

You're thinking: "they updated the original ... with an all black cast?!?" and you would be right. Surprisingly though this version offers competent take on by now hallowed material with engaging musical numbers and winning portrayals. There only one drawback really that keeps this one buried in the dustbin of forgotten films and that's Diana Ross' age. She's the elephant in the room, almost nearly talented enough to make you forget, but not quite enough. Misses it by that much.

Other than a few moments here and there, time has not been kind to this Motown spectacle.

This is one of those movies people either love or hate, personally I hated it when I saw it as a kid, it seemed to me that this was just the Wizard of Oz with an all black cast, and I didn't see the reason for it. Plus, it has a totally different, and very strange, kind of style that I just couldn't understand. I hated it, but I may give it another try someday.