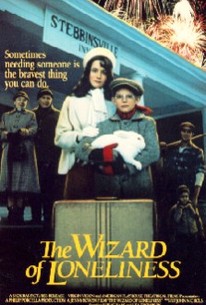 In this film, based on the novel by John Nichols, young Wendall Olet (Lukas Haas) is sent to live with his Aunt Sybil (Lea Thompson) and Uncle John (Lance Guest) when is father is called on to fight in World War II. Lonely and unhappy, Wendall harbors the delusion that he possesses amazing powers and becomes involved in some family secrets.

Critic Reviews for The Wizard of Loneliness

The gravity and gaiety of the film makes its coming-of-age theme quite special.

There are no featured reviews for The Wizard of Loneliness at this time.

The Wizard of Loneliness Quotes