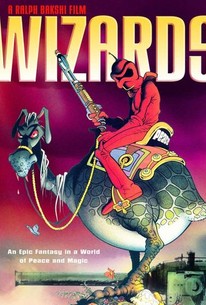 Critics Consensus: Its central metaphor is a bit too on the nose, but Wizards is an otherwise psychedelic, freaky trip into an alternate version of our world.

Critic Consensus: Its central metaphor is a bit too on the nose, but Wizards is an otherwise psychedelic, freaky trip into an alternate version of our world.

In this animated futuristic tale, a pair of twins must fight for domination of what is left of the world, the good man using the powers of magic in an attempt to save the Earth, and the evil twin taking advantage of the horrors of technology that again threaten to destroy everything.

Ralph Bakshi's animated sword-and-sorcery tale is a long way from his best work, marred by cut-rate techniques and a shapeless screenplay.

Moderate fun here and there.

Mr. Bakshi's allegory is fairly obvious from the outset, but he and his animators are convincingly professional. They have devised a melange of animation and live footage that gives their feature mystical, slightly scary and, occasionally, comic tones.

What is at least galavanising and shocking in the context of Bakshi's earlier films seems more like an out-of-control tic here.

There are moments of beauty, but it's a far cry from Fantasia.

If Wizards is a failure, then it's a fascinating failure.

Bakshi is direct in his imagery and his messaging: the drumbeat of war and the rush of new technology is killing us...Wizards is far more than a simple animated curiosity, but a surprisingly dark, dangerous, and compelling piece of fantasy.

Bakshi's filmmaking is sloppy and slapdash at times, to be sure, but it is also uncompromising.

The story is kind of a mess, but Wizards goes beyond your standard sword and sorcery tale into some heavy surrealism.

a unique film unlike anything else you'll see from this era

Story and characters leave much to be desired, but there's something wonderful about this refreshingly gritty, innovative animated feature.

Its status as a low-budget cult film seems secure. I just don't think it's as good a film as it might have been with more restrained storytelling or art design.

Bakshi's first foray into fantasy animation and the experience he needed to gain confidence for his vision of 'The Lord of the Rings'. The story is simply about a post apocalyptic Earth where mutants live alongside new races of elves, dwarfs and fairies...yes. Two brother wizards battle each other, one on the side of the elves and dwarfs, the other with the mutants. They rage war to claim/save the Earth as you might have guessed. This sure is a weird combination of ideas that's for sure, hand drawn animation of goblins, elves, wizards, knights, mutants etc...Rotoscoping used for many battle sequences which appear to show various winged demons, orcs/goblins, many more knights and various live action sequences taken from other films and historic footage. The whole idea is the baddie wizard with his mutants discover ancient buried technology from our present day and use it against the good forces. This includes planes, tanks, machine guns and a film projector which projects footage of Hitler and his Nazi's. Certainly an odd inclusion for what was meant to be for youngsters as well as adults. Never the less this animated film shows how propaganda when used correctly can be devastating just as technology can be. There are a few allegories within this film which are quite clever and would clearly go over a kids head, I was never really sure who this film was really aimed at. There are plenty of bloody moments throughout just like in Bakshi's LOTR, lots of creatures getting cut down with blades and shot to pieces by gunfire, even an arrow and meat cleaver to the head for two unlucky characters! Add to this hookers that hang around in the streets of the evil wizards city of Scortch and the good wizard Avatar has a sidekick fairy in training called Elinore who is dressed in a very skimpy breast revealing little number (Jessica Rabbit eat your heart out). Clearly for the adults and clearly Bakshi utilizing his skills from previous urban based animations. A strange mix of different concepts but definitely no lack of imagination and flare. The animation is your typical 70's look which I'm OK with I guess, it does age somewhat naturally but reminds me of many tatty old foreign cartoons from my childhood which were slightly obscure. A strong colour palette much the same as LOTR incorporating nice dark cloudy skies, bleak murky landscapes and some decrepit dusty old cityscapes set the scenes nicely. The blend of animated characters and rotoscope is fine but not as natural looking as the later LOTR, this tends to look a bit crowbarred together, plus the animated characters look a tad too cartoonish in places. Overall its hard not to compare to this to his other cult work, but the Tolkien adaptation probably wins due to the story for one and the fact visually its a more oiled machine. 'Wizards' is an interesting but not very novel idea about simple ways vs technology. All the archive footage from Nazi Germany is possibly not required along with the baddie characters having Swastika's on them, comes across more like a fascists wet dream from time to time. I do like this film more for the artistic side really, the rest is somewhat dull with a lot of dialog that is uninspired. Some characters look really good like the thin soldiers wearing gas masks, whilst others look like something from a cheap kids flick. Certainly worth a watch but its nothing to rave about. A Bakshi oddity which remains a full cult with intriguing visuals but little else.

Bakshi's fantasy sci-fi movie has his great animated style as always, and the story is very interesting. I enjoyed this movie, and if you like Bakshi's work or just fantasy cartoons, you'll like it too.

Extraordinary adult-themed cartoon. The confrontation at the end is worth your time alone.

This bizarre and unique film could only have come from the mind of Bakshi. Throw all of your preconceptions of animation aside and enjoy this artistically different film. It has the good fairies and elves battling the evil mutants. All goes wrong when the mutants uncover footage from a forgotten time, this footage is of Hitler and his atrocities. They use it to strike fear into their enemies and it's up to a Wizard, an Elf, a girl in training and a reformed assassin to stop the mutants. Mixing the animated characters with detailed backgrounds along with live action battle scenes "made up" to fit into the film, it's a brilliant and ingenious use of the medium. The story will appeal to literally all ages, though maybe the youngest of children should steer clear. The ending was both brilliant and hilarious, not to mention cool as hell. The voice talent was all very natural, each line sounds like it could come from a real person and not just a cartoon. This is a film for any fan of animation, craving something different from Pixar/Disney/Ghibli etc.