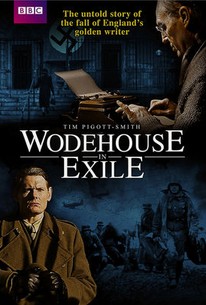 At the start of World War Two English humorist P.G. Wodehouse and his wife Ethel are living in France but fail to escape the invading Germans when their car breaks down. Wodehouse is sent to an internment camp in Poland where he entertains his fellow inmates with his witty anecdotes so that A German who met him in America suggests that Wodehouse be allowed to broadcast to the Americans - not yet in the war - thus giving the impression that the Third Reich is not so monstrous. Under the guise of his being sixty Wodehouse is released and sent to Berlin to make his broadcasts,which abound in political naivety,and he is shocked when a fellow internee whom he suspects of actively working for the Nazis is released. He comes to feel that he has been used. Ethel travels to Berlin and they move to Paris,where,as the war ends,Wodehouse learns that Ethel's daughter Leonora,has died, A further blow is the knowledge that he may be tried for treason but finds a sympathetic interrogator in secret service officer Malcolm Muggeridge,who arranges for his release from custody. Though Wodehouse is never charged he is made to feel unwelcome in Britain as artists and political commentators register their scorn for his alleged treachery. As a result he and Ethel move to America and never set foot in Britain again.

Critic Reviews for Wodehouse in Exile (Wodehouse In Exile)

There are no critic reviews yet for Wodehouse in Exile (Wodehouse In Exile). Keep checking Rotten Tomatoes for updates!

There are no featured reviews for Wodehouse in Exile (Wodehouse In Exile) at this time.