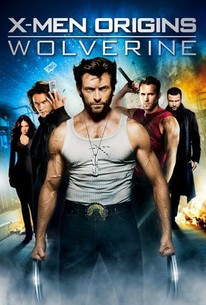 The gruff, adamantium-clawed Marvel superhero Wolverine strikes out on his own in this X-Men spin-off starring series regular Hugh Jackman. The story gets under way as the boy who will become Wolverine makes a shocking discovery about his family bloodline, and gains a brother in the process. Flash forward to find the mutant siblings battling side by side through two world wars and Vietnam -- where they are sentenced to death for killing a commanding officer -- and Logan (Hugh Jackman) and his brother, Victor Creed (aka Sabretooth, played by Liev Schreiber), have joined a top-secret government task force. When their targets begin to include innocent civilians, conscientious Logan escapes to the Canadian Rockies, where he builds a home with pretty schoolteacher Kayla Silverfox (Lynn Collins). Informed by his old commanding officer William Stryker (Danny Huston) that the members of his old team are being targeted for death, Logan is heartbroken when Victor finds and kills Kayla. Vowing revenge, Logan agrees to take part in a dangerous experiment that will fuse his bones with a powerful metal alloy called adamantium, which makes him virtually indestructible and gives him the strength needed to defeat his powerful brother. Subsequently betrayed by Stryker, Logan (now Wolverine) sets out to find his blood-lusting brother and stop the cycle of violence once and for all. Along the way, the temperamental hero is joined by fellow mutants John Wraith (Will.i.Am) and Remy LeBeau (aka Gambit, played by Taylor Kitsch). But before Wolverine can seek vengeance against Striker and his brother, he'll have to do battle with Deadpool (Ryan Reynolds) a formidable mutant instilled with many powers. ~ Jason Buchanan, Rovi

Revenge soon grips Logan when his love is taken away, but Tsotsi director Gavin Hood seems bored by the sibling rivalry; even the Frankensteinian weaponizing of a human body feels rushed.

Wolverine starts with a roar before sliding into a chaotic, preachy mess.

You won't be upset you saw it, you'll have some fun, you'll see Wolvie beat the living hell out of a helicopter.

Is there anything to enjoy in X-men Origins: Wolverine? Sure. Some of the fights are cool. But for every solid moment there is an equivalent of pure suck.

Did the plot points stick in my head five minutes after leaving the theater? Not so much ... but I know I was having fun while watching.

Even when the hand-to-hand combat looks impressive, the stunts get far-fetched, pushing the special effects to the limit.

The only truly solid performance comes from Liev Schreiber.

Toothy, energetic and wild, X-Men Origins: Wolverine may not live up to high fan expectations, but it's entertaining enough to tempt new viewers to the franchise.

There's plenty of brawn and brute force to go around of course, but it lacks the heart and soul that distinguished the franchise.

Wolverine is as visually enticing as films get, but it still feels soulless. Just like in the funny books, pyrotechnics is no substitute for a well-told yarn.

The worst installment of the highly regarded franchise to date, Wolverine is a mess of an action film with a retread plot. Hugh Jackman is still really good like always, but many of the newcomers are lacking when compared to the other installments. Focusing on just Wolverine takes out too much of the fun of the other films. It just doesn't feel the same and when you change elements of a successful franchise you have to replace them with something worthwhile. That was the biggest mistake. This is not worth the time.

the entire film worked incredibly well for me until the final act, which fell so flat that it left me feeling that the film as a whole lacked the direction that seemed to build well in the first two thirds of the movie. it wasnt just one or two things, but rather the entirety of the final act that took a wrong turn from the art direction, to the motivation of the characters, to the script itself. Entertaining but overall pretty bad.

Wolverine, Deadpool, lots of action . .i enjoyed this from start to finish. Lots of more hard core comic people may have not liked it. I on the other hand not being one of them loved it.