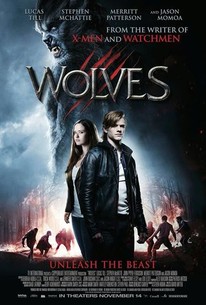 Popular high school student Cayden Richards wakes from a horrific nightmare, only to realize that he's living it... He is changing into something vicious, unpredictable and wild. Forced to hit the road after the brutal murder of his parents, Cayden tries to hunt down the truth of what he is. In the remote, mountain town of Lupine Ridge, he discovers others like him - Including the beautiful Angelina, a young woman caught between two ancient clans of "wolves". And when he finally discovers the shocking truth behind his ancestry, Cayden realizes there is only one way to save the woman he loves... a grisly fight to the death against forces more savage than he could have ever imagined. (C) Ketchup

Lucas Till
as Cayden Richards

Ryan Brownlee
as Bartender
View All

Critics Consensus: Dumb and Dumber To Has Too Few Laughs

Swoopy-haired star Lucas Till makes for a credible young western-style hero, but even he's upended by the often silly, inconsistent story.

The kind of pleasantly eccentric werewolf coming-of-age story that should be seen as the third-billed title in a horror movie marathon. When viewed on its own, one can't help but wonder who "Wolves"' was made for.

Wolves limps along with a clunker of a script and unremarkable effects.

As unoriginal as its title, David Hayter's "Wolves" is yet another hoary, hairy transformation narrative featuring lycanthropy as a metaphor for coming of age.

The first 30 minutes of this cheap-looking monster drama are admittedly rough going. But once the "Twilight"-meets-"Sons of Anarchy" silliness kicks in, there's a lovable lunacy at work.

There aren't a lot of surprises, but the all-important transformation scenes are furry fun and any horror film with Stephen McHattie is worth a look.

There's modest fun to be had in this campy low-budget horror flick that ultimately doesn't have much bite.

This, as you've doubtless guessed, is all quite silly. And occasionally charming, too, in its wilfully old-fashioned way.

A superhero-style origin story, only one that involves big, hairy, scary werewolves and some True Blood-style lunacy.

It's loud and violent, but the feature drags more than it should, struggling with iffy performances and lousy visual effects to raise a properly furry screen commotion.

The screenwriter for 'X-Men' and 'X-Men 2' casts one of the newer younger X-Men members for the lead in his 'I promise you its not Twilight for werewolves' movie. In all fairness this isn't a Twilight movie, in fact its a pretty dark menacing werewolf thriller which actually manages to provide us with a half decent Jason Momoa performance, he actually fits here. Plot wise its the usual thing, a young male isn't sure whats wrong with himself, he has lots of dark nightmares and can do unusual things, turns out he's a werewolf. The beginning of the story is narrated to us by the main character, about his early years and why he ends up running away. From there we follow this young man as he discovers a remote town chock full of werewolves, some good and some bad. He helps out a local old couple on their farm and slowly starts to learn the ways of the town, who runs the show and why and eventually how all this connects to him. Of course this wouldn't be a dark brooding mythical creature flick without a soppy love interest to heighten the tension. OK so despite the protagonist being a young, smooth faced, blonde, firm pretty boy, I promise you this isn't a Twilight-esque fantasy. For starters there is blood, gore and body parts in this, not tonnes of it but you won't be left wanting. We are very quickly introduced to a young slightly out of control werewolf who will batter the shit out of anyone when he gets upset, in fact he'll tear anyone limb from limb if he really gets upset. The plot builds slowly but predictably with the usual type of cliches we've all seen before. The newcomer in a strange town who faces off against the local gang of burly men. The familiar Pa and Ma Kent type scenario as the young Cayden is taken in by an old couple who just happen to own a farm, they look after him and slowly become almost like a family. Of course the old couple have a young daughter whom Cayden falls for and must rescue in the end and there is an obvious twist with the alpha antagonist and the secondary antagonist who pops up at the end...unsurprisingly. There is no new imaginative angle on werewolf lore here other than the fact that traditional methods to kill a werewolf such as silver bullets, Wolfsbane etc...don't work in this universe. But there are two kinds of werewolf here, a pure bred which was born with lycanthropy and 'the bitten' which is self explanatory, the latter are not as strong and cannot heal as well as a pure bred. As always though there is the issue of what can kill a werewolf, in this movie some wolves get killed off by gun shots, explosions or by simply getting slashed (the bitten), which seems a bit useless to me. The purebreds can survive a lot of damage with their health regeneration abilities such as falling from huge heights, suffering badly broken bones and getting beaten half to death...yet in the end the alpha baddie werewolf gets killed with a slash to the throat? eh?? It is also mentioned that a werewolf can transform whenever he or she wants too, they don't have to wait for a full moon but I think they are stronger under a full moon. In this movie they can transform under strong emotional rushes such as lust or anger, hence they can change when losing control of such emotions, which can cause problems. Lets not beat around the bush anymore though, the plot is weak and in all honesty most of the characters are pretty bland and unexciting. The films comes to life when these characters change into werewolves...mainly Momoa (alpha baddie) and Till (pretty boy goodie). The makeup effects are really really good, I was totally blown away with the werewolf facial designs and bodysuits. I honesty haven't seen anything this good for a long time, the fur is realistic, the teeth, mouth, nose, eyes and claws are all tremendous looking. Till looks like a badass version of 'Teenwolf' where as Momoa looks like a tank of a werewolf! in fact he actually looks too big, almost swollen. I liked how they also incorporated human hair/facial hair into the wolf designs which does make sense as that wouldn't just disappear. The body movement of the characters in wolf mode is also impressively done with live action stunts and wire work I'm guessing, didn't look like CGI. The fights are also quite brutal and really intense, lots of biting, slashing and ripping as these guys knock chunks out of each other! full on werewolf badassery right here folks. I must also give kudos to John Pyper-Ferguson as Wild Joe, a kind of crazyass skinny, redneck one-eyed cowboy who is the backbone behind the story and turns out to be pretty badass himself. Its just a shame we didn't see more of him fighting as Momoa's band of bitten werewolves are terribly regular looking and badly cast. Most of this offers nothing new I won't lie to you, end of the day its just another chance to create awesome new hands-on werewolf effects. That's all its about really, the rest of it can fall by the wayside because its just filler until we see some lycan action. I like that they made this an adult action gore thriller and there are some lovely shots, use of lighting, editing with the fights etc...it all looks glossy and well made long story short. I love werewolf (and vampire) flicks, this obviously isn't the best werewolf movie I've seen but it was surprisingly entertaining I won't deny...most of that being down to the superb makeup prosthetics.