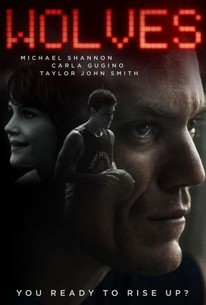 Anthony (Taylor John Smith, American Crime, HBO's upcoming Sharp Objects) is a standout player on his Manhattan high school's basketball team with seemingly everything going for him: a killer three-point shot, a loving girlfriend (Zazie Beetz, Deadpool, Atlanta), and a chance at a scholarship to Cornell. But Anthony's dreams of playing college ball are jeopardized by his volatile father (Oscar nominee Michael Shannon, Nocturnal Animals, Take Shelter), a hard-drinking writer whose compulsive gambling threatens to derail the lives of both his wife (Carla Gugino, Watchmen, Night at the Museum) and son. Though it goes against his nature, Anthony must summon the strength to step out from his father's shadow and reclaim his future. Boasting an explosive performance by Michael Shannon, WOLVES pulses with the energy of New York City and "the most compelling basketball scenes since Hoop Dreams" (David Ehrlich, Indiewire)..

It's Shannon who lights up the screen, and without him it's hard to imagine this effort would be worth talking about.

Bart Freundlich alternates somewhat arbitrarily between his various plots, leaving a lot of loose ends in the process.

It's all terribly cliché-ridden and predictable, and the best I can say for it is that Shannon and Gugino do their best to convince us otherwise.

Freundlich clearly likes to dig in deep with this kind of character material, and here it pays off in ways it really hasn't in some of his previous feature work.

A modestly pleasing, unsurprising indie about a family undone by anger issues.

It all leads pretty much where you think it will, down the court on the ever counting clock, but the circuitous route's (mostly) worth traveling.

Yet another depiction of fading, archaic white patriarchy while also seeming to champion its potency and relevancy.

On the basketball court, this gritty drama has some scoring ability. But off the court, it's an unconvincing mess of clichés.

The overly-contrived basketball game finale is classic Freundlich (which is to say eye-rolling), but there are times even he, not just his excellent actors, gets things right.

While 'Wolves' boasts exciting basketball scenes plus excellent performances, it's also too predictable and contains a very strange ending.

There are no featured audience reviews yet. Click the link below to see what others say about Wolves!