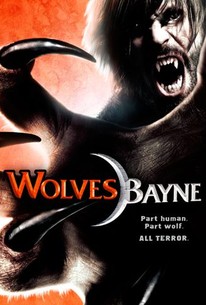 Callous, high powered real estate developer Russell Bayne (Jeremy London) finds himself caught up in a brewing war amongst the creatures of the night after getting bitten by a werewolf and discovering that vampires are attempting to take over the world. Meanwhile, the battle between the bloodsuckers and lycanthropes is just the beginning; a renegade faction of vampires led by Von Griem (Marc Dacascos) is attempting to resurrect Lillith (Yancy Butler), the legendary vampire goddess. Should they succeed, mankind's days will surely be marked. With each day that passes, Lillith's power continues to grow. Now, the only way for Bayne to stop her is to embrace his inner beast with the assistance of Alex Layton (Christy Carlson Romano), and team up with legendary vampire slayer Jacob Van Helsing (Rhett Giles) to stake every vampire who stands in their way.

When Wolvesbayne was over I kind of had the feeling I'd just spent 90-minutes watching the superhero origin movie for a minor supporting sidekick.

A poor werewolf story with some bad acting cheesey effects. Some parts were fun I guess...but it tries too much to be a cult classic. Also, the ending sequence (and the climax) were pretty bad...and they could've done way better.