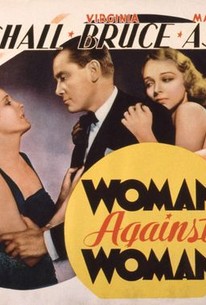 Herbert Marshall finds himself torn between two women: ex-wife Mary Astor and bride-to-be Virginia Bruce. After a while, Marshall's own opinions in the matter mean nothing. The ladies are so involved in their personal battle that they've lost sight of their common goal. Only when Marshall tells the two women to shut up and listen to him does peace descend upon the landscape. Based on a short story by Margaret Culkin Banning, Woman Against Woman is mighty MGM's idea of a modest "B" picture--featuring a stellar cast that at any other studio would be too way costly for an "A".

Critic Reviews for Woman Against Woman

There are no critic reviews yet for Woman Against Woman. Keep checking Rotten Tomatoes for updates!

There are no featured reviews for Woman Against Woman at this time.