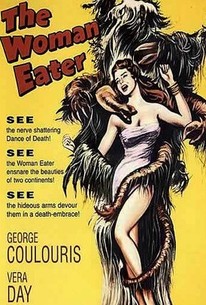 Dr. James Moran (George Coulouris) is a scientist whose goals are beyond the pale of established medical science. While on an expedition to a remote part of the Amazon jungles, he encounters a huge plant being worshipped by a mysterious race descended from the Incas -- a plant that feeds off of women, devouring them almost like a giant Venus flytrap, and which also generates a fluid that can bring the dead back to life. Five years later, Moran has moved the plant into a laboratory in his basement, complete with a member of the tribe of worshipers who is capable of caring for it, and begins to experiment with it -- but he must find women to feed to it. Moran believes that using his scientific approach, the plant's sap will not only reanimate the dead, but could give its recipients immortality. He proceeds with his experiments despite the inquiries of the police, who are investigating the disappearances of several young women. He adds to the inevitable complications of his deceit when he brings in a pretty local girl (Vera Day) to assist his middle-aged housekeeper (Joyce Gregg), evoking deep and ultimately murderous jealousy from the older woman, who loves the doctor and also hasn't a clue as to what he's been up to in the basement laboratory, which is always locked. He's forced to kill her, and she becomes the object of his first serum experiment -- but she returns to life as a mindless zombie, and Moran realizes that all of his work, and the murders he's committed, have been for nothing. He recognizes that he has a monstrosity in his home, but it's still protected by that tribesman, who cares about nothing except the good of the plant. ~ Bruce Eder, Rovi

John A. Tinn
as The Lascar

Critic Reviews for The Woman Eater

There are no critic reviews yet for The Woman Eater. Keep checking Rotten Tomatoes for updates!

Audience Reviews for The Woman Eater

There are no featured audience reviews yet. Click the link below to see what others say about The Woman Eater!