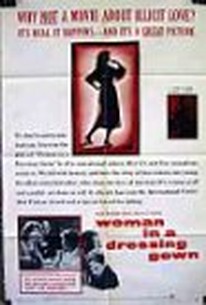 Based on a popular British television drama, this 1957 film features a riveting performance from Yvonne Mitchell as a housewife who can't keep house. Mitchell plays Amy Preston, who after 25 years of marriage still hasn't mastered the domestic arts necessary to sustain a traditional 1950s-style marriage. Her long-suffering husband Jim (Anthony Quayle) finally gets fed up with Amy's unpalatable dinners, her slovenly dress, and the messy home. He takes up with Georgie Harlow (Sylvia Sims), a young woman at his workplace and realizes that he will soon have to choose between the two women. ~ Michael Betzold, Rovi

Roberta Woolley
as Christine
View All

Critic Reviews for Woman in a Dressing Gown

Despite the over-facile resolution of the last scene, one's final impression is of an emotional drama of considerable intensity.

This is both a reminder of British sexual mores in the darker days of the Fifties and one of the first attempts in a genre that was later referred to as kitchen-sink drama.

It's utterly compelling, both as a historical document and as heartbreakingly plausible drama.

The most affecting aspect of the film is its sense of compassion: we're never asked to condemn or condone, merely to understand.

The British cinema today is an enigma as much as a legend. How have the descendants of Daniel Defoe, Thomas Hardy and George Meredith reached such a degree of incompetence in matters of art?

J. Lee Thompson's direction has a few documentary-style cliches about it, but provides a good, empty space, most of the time, for Miss Mitchell's virtuosity to shine in.

The facile ending, with its suggestion of "happy ever after", is in line with the compromising attitude of the film as a whole; and rings entirely false.

[A] stilted, patronising British movie about working-class and lower-middle-class life...

A film that deserves to be better known and a welcome reminder of what a fine actress the late Yvonne Mitchell was.

Hard and uncompromising, yet charged with sad fellow-feeling regarding the lies that we tell ourselves and the compromises we make, this is elegant, adult cinema with a fierce emotional punch.

Audience Reviews for Woman in a Dressing Gown

There are no featured audience reviews yet. Click the link below to see what others say about Woman in a Dressing Gown!

Woman in a Dressing Gown Quotes