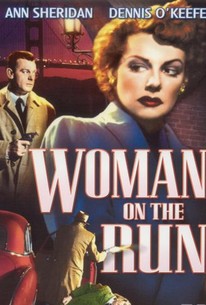 Woman on the Run Photos

Though it is Ross Elliot who witnesses a gangland rubout in Woman on the Run, the film is told from the point of view of Elliot's wife, played by Anne Sheridan. When Elliot goes into hiding, the police approach Sheridan and ask her aid in locating her husband. She is reluctant at first, since hers is a marriage in name only, but her conscience is aroused when she learns that Elliot is suffering from a potentially fatal heart ailment. Reporter Dennis O'Keefe offers to go along with Anne in her search for Elliot. He's a real friendly reporter. Real, real friendly, and helpful, too. So guess who the "hit man" hired to by the mob to kill Elliot turns out to be?

Critic Reviews for Woman on the Run

The picture's attempt to dovetail its marital problem with its manhunt makes for a promising story skeleton; unfortunately, it has been fleshed out with a minimum of imagination.

Woman on the Run will not win prizes but it does make crime enjoyable.

A superb showcase for Sheridan.

Those in search of overlooked gems of film noir should be pleased with this cleaned-up Ann Sheridan headliner.

The roller coaster finale is especially thrilling, releasing 70 minutes worth of tension that makes for a tightly crafted joyride of a film.

Woman on the Run was shot on location in San Francisco, and the city is smartly utilized.

Audience Reviews for Woman on the Run

Ann Sheridan leads this noir effort as the wife of a man who accidentally witnesses a murder and she hopes to find him after he goes underground. Dennis O'Keefe is a reporter helping. Can they find her estranged husband before the murderer gets him? Lots of great shots of old San Francisco add depth and color. Tension in the Urban Paradise Now.

great poster, great film, great role for ann sheridan as a tough talking dame with a well hidden heart of gold. this is a really underseen noir and it's on internet archive

A great Black & White Suspense Film, I came upon it because its on a list of Ross Elliott Films, He doesn't play a big part, but the actors that do are great. Ann Sheridan is a doll. Her Husband is out walking the dog when he sees a Murder, but he goes into hiding because he knows the killer, and the killer is after him. The killer poses as a newspaper man who teams up with Ann to track down her husband, unknowing to Ann. Ann doesn?t like her husband much until she starts searching for him and finds out he truly loves her. Everything a Black & White Movie Should Be, 4 Stars and added to the collection. Should you rent it or Buy it, You better do one or the other you will not be sorry.

Woman on the Run Quotes