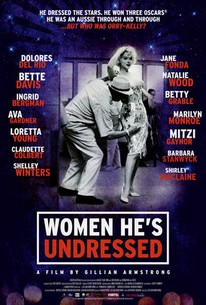 During the Hollywood boom years the legendary Orry-Kelly was costume designer on an astonishing 282 motion pictures, designing for Marilyn Monroe, Bette Davis, Humphrey Bogart, Rosalind Russell, and many more stars. Orry was as big a legend behind the scenes as the on-screen legends he adoringly dressed. Three times an Oscar winner, Orry was talented, daring, brash, bold and the toast of Hollywood, yet the thorn in the side of many a studio head. WOMEN HE'S UNDRESSED celebrates his story. Includes interviews with: Actors Jane Fonda and Angela Lansbury, critic Leonard Maltin, costume designers Ann Roth , Catherine Martin, Colleen Atwood, Michael Wilkinson, Kim Barrett, plus family members and more.

After learning about Orry-Kelly's dedication and creativity, one can't help but eagerly dig back into his 301 films, his name a sign of style and elegance after that now-antiquated "Gowns By" credit.

The clips Armstrong and her team have rounded up make us appreciate how, in a whole range of situations, costumes express character.

The golden age of Hollywood offers a feast of juicy material and Armstrong digs in with gusto.

Gillian Armstrong's lively, cleverly constructed documentary is a celebration of a life and an art. It's also a playful exploration of the creative achievements of an Australian who played an important role in the Golden Age of Hollywood.

The film overstays its welcome by punctuating his story with ill-advised dramatic fantasy sequences that are meant to illustrate the anguish of a gay man in mid-century America, but come across as heavy-handed and mean-spirited.

A rollicking if somewhat ham-handed documentary about the life of costume designer Orry-Kelly.

A raucous, affectionate, hilarious, gossipy and engrossing portrait of the most famous Australian you've never heard of.

Women He's Undressed is a must-see fashion extravaganza for film lovers, and a never before seen glimpse into the unapologetically rich life of Orry-Kelly.

A Hollywood romance, broken hearts, beautiful women, and most of all, beautiful dresses, this is a grand story and a great chapter in Australian history.

From the outset of this fascinating documentary, decorated Australian filmmaker Gillian Armstrong is a woman on a mission.

Women He's Undressed is a tragic delight. Tragic in the sense that Orry-Kelly is one of the greatest talents many have never heard of, yet delightful in seeing how much Kelly's work influenced the design and style of Old Hollywood.

The slightly jarring whimsical style works to emphasize Orry-Kelly's uniqueness - and surely everyone will find his relationship with one Archibald Leach intriguing.

There are no featured reviews for Women He's Undressed at this time.