Women of the Prehistoric Planet (1966) 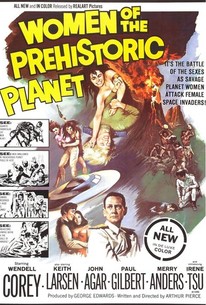 Cosmos 1, an interstellar spacecraft, is heading to its home base after a long mission when it receives a distress call from its sister ship, Cosmos 3. Some of the ship's Centaurian crew -- members of a once proud race who are now subservient to humans from the fleet's home world -- have rebelled. Cosmos 3 crashes on Solarius, an unexplored planet in a young star system, leaving behind five survivors, among them the Lt. Anderson and Zenda, human/Centaurian couple. The Cosmos 1, under the command of Admiral King (Wendell Corey), makes the three month journey to Solarius at the speed of light, during which, because of the time paradoxes involved in light-speed travel, 18 years elapse on the planet. A landing party led by First Officer Scott (Keith Larson) begins searching for the wrecked ship and any survivors, and discover that this is a tropical world, beautiful and dangerous, filled with exotic birds and flowers, huge lizards and snakes, deadly insects and other animals, and crystaline pools and boiling pits. Meanwhile, Linda (Irene Tsu), a young Centaurian from Cosmos 1, gets lost in the jungle and is rescued by Tang (Robert Ito), a young man living in the primordial forests -- she discovers that he is a Centaurian and the son of Anderson and Zenda. The two are attracted to each other, even as the crew of the Cosmos 1 is trying to rescue her and keep themselves alive. A conveniently timed volcanic eruption forces the issue of how far the admiral can carry this mission.

Critic Reviews for Women of the Prehistoric Planet

There are no critic reviews yet for Women of the Prehistoric Planet. Keep checking Rotten Tomatoes for updates!

Audience Reviews for Women of the Prehistoric Planet

A cheap exploitational sci-fi about a space crew crashing on a primitive planet filled with women and one of the crew members (who isn't human) fell in love with another non-human on the planet. I spent more time sleeping than watching it.

Women of the Prehistoric Planet Quotes