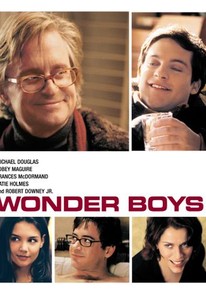 Grady Tripp is a professor/writer living in Pittsburgh who is struggling with writer's block. Whilst doing this, he also manages to get the chancellor pregnant. In the meantime, he and a college student, James Leer are trying to find a rare jacket once owned by Marilyn Monroe, and a college girl, Hannah Green boarding with Grady has a bit of a crush on him.

Katherine Sweeney
as Student
View All

Rachel Lambert’s Five Favorite Films
Another Bout of "Babysitting"?
Critical Consensus: A Weak "Sentinel," So-So "Dreamz" Are Made Of This, "Silent Hill" Not Screened

This grand mess of a movie has many pleasures.

Michael Douglas gives the best perfromance of his career (to be remembered at Oscar time) in this screwball comedy about a college professor who's pushed into maturity by forces beyond his control; a well-acted coming-of-age saga for adults.

Wonder Boys digresses so entertainingly, you forget how quickly Grady got into the mess he's in, and can't imagine where we might be headed.

With so much to say, Hanson's movie is too frenetic.

Get going, you laggards.

The overall effect is like opening a present on Christmas morning.

A silly, anodyne, and terribly absurd comedy drama, packed with characters as flat as a freshly printed blank sheet. [Full review in Spanish]

This is probably my favorite comedy of the past twenty years.

Like a favorite novel, "Wonder Boys" gets more comfortably broken-in with each return, and Michael Douglas wears Grady Tripp's scruffiness as sharply as he does Gordon Gekko's natty clothes - addressing jealousy, panic and terror in creative complacency.

One of those films where the term 'character study' is used to excuse the fact that there's nothing of real interest in the story.

If Douglas and Hanson have aimed to make Grady as simultaneously weary and jazzed...as Bob Dylan's Oscar-winning theme song is, they have come enticingly close, with marvelous highs along the way (not just the narcotic kind), but they haven't fully got th

As far as being a writer goes, I may personally just be a hack amateur wannabe, and, even though I plan on being a professor, I'm not there yet. Regardless of all that though, this movie really clicked with me, and I found myself really tapping into its frequency. The inclusion of Bob Dylan makes this already great film even better. If you're not into Dylan, or at least not later Dylan, you probabky won't agree. I think it fits perfectly though, so I'm glad it's in the movie. Even though my intro to this review showed my inability to completely relate, a movie about passionate people struggling to deal with all life puts them through is something that everyone can get, even if the specifics differ from the viewers' own personal experiences. The weary, stoner, neurotic Grady Tripp is a great character. He's someone you can love and feel for, yet he's still very ragged, and you wonder why you should continue to care, if you ever really did to begin with. Michael Douglas is fantastic as Tripp, giving one of his best performances in years. Tobey Maguire, I feel, is channeling Bud Cort's work from Harold & Maude, and it pays off. He also gives an excellent performances as the troubled and mysterious prodigy. Katie Holmes has a smaller role, but she's also pretty good. Sometimes I forget that she does have talent. Downey Jr. and McDormand also give fine performances as always. I liked that this was a small movie, and that it has high artistic vlaue, but that it isn't too pretentious or artsy, and that it became a sleeper hit. I haven't read the source material, but it seems like something I could see myself enjoying. There aren't a whole lot of overtly cinematic moments, with lots of abundant style and flair, but this is definitely a "film" as opposed to a "movie". This ranks, along with L.A. Confidential, as Curtis Hanson's best film, and one you would do well to see. It's charming, touching, and very entertaining.

It's perfectly fine. I don't really buy anybody's character though. Michael Douglas, a depressive writer? Tobey Maguire, a psychopath? Katie Holmes, a writing ingenue? No, no, and no.

"Wonder Boys" is just a lot of fun. It's not really saying anything in the way of college professors, writers or students, but it certainly gets all of their personalities correct. The movie is more about character and dialogue- this is an actors film. The cast works wonders with terrific work from Michael Douglas, Robert Downey Jr, Tobey Maguire, Frances McDormand, Katie Holmes and Rip Torn. "Wonder Boys" is witty, smart, energetic and extremely well acted.

I don't like movies about movies and this is the next worse thing. A self-indulgent writer's fantasy. Putting a pair of glasses on A-list stars and making them waffle on about obscure facts doesn't turn them into convincing academics. Typical quirky American indy with Tobey Maguire playing a creepy kid again.